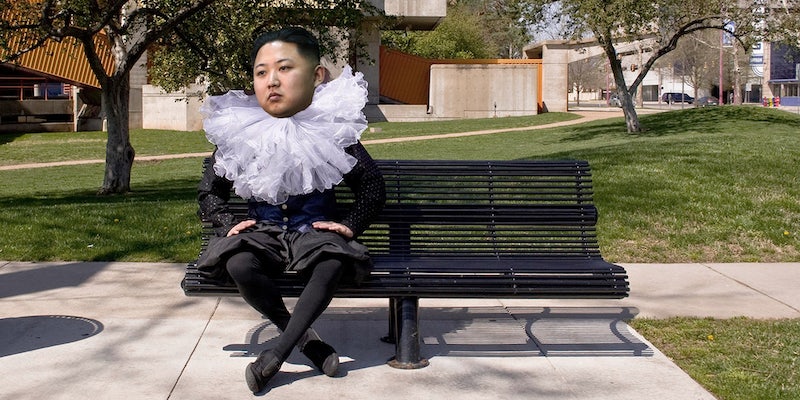 Because I could not stop for hack, he kindly stopped for me.

The statement followed the FBI’s allegation that North Korea had directed the group responsible, which calls itself the Guardians of Peace. The U.S. further alleged that North Korea had been behind the threat of physical violence directed at movie theaters showing Sony’s film The Interview.

In its statement, the North Korean government took the opportunity to deny any direct involvement. However, it did express support for the Guardians of Peace and castigate the U.S. government for its supposed backing of the film, which portrays an American plot to assassinate North Korean dictator Kim Jong-un.

The approximately 1,600-word document is written in what The Guardian called “the colorful phrasing typical of official North Korean statements.” We happen to think that, more than anything else, the statement represents an oddly elegant work of unintentional poetry.

We decided to make this poetic voice intentional, giving North Korea’s broadside against American imperialism a bit of editing and reformatting to more closely resemble the absurdist poetry it actually is. We hope you enjoy the beautiful poetry of the Hermit Kingdom’s brutal, paranoid, authoritarian, mass-murdering ruling regime:

Pyongyang, December 21 (KCNA) —
The Policy Department of the National Defence Commission of the DPRK issued the following statement Sunday:

Strange thing that happened in the heart of the U.S.,
the ill-famed cesspool of injustice,
is now afloat in the world as shocking news.

The NDC of the DPRK
highly estimates the righteous action taken by the “guardians of peace,”
though it is not aware of their residence.

For these reasons, the DPRK is more highly praising the “guardians of peace”

After all,
the grounds cited by the FBI in its announcement
were all based on obscure sci-tech data and false story
the announcement itself is another fabrication.
This is the DPRK’s stand on the U.S. gangster-like behavior against it.

It is not exaggeration to say

in the light of the prevailing situation
that the U.S. administration and President Obama
looking after the overall state affairs of the U.S.
have been behind the case.

Can he really cover up the crimes he has committed
by trying so hard to falsify the truth
and turn white to black.

The DPRK has already launched the toughest counteraction.
Nothing is more serious miscalculation
than guessing that just a single movie production company
is the target of this counteraction.

Our target
is all the citadels of the U.S. imperialists
who earned the bitterest grudge of all Koreans.
The army and people of the DPRK
are fully ready to stand in confrontation with the U.S.
in all war spaces including cyber warfare space
to blow up those citadels.

The just struggle to be waged by them across the world
will bring achievements thousands of times greater than the hacking attack on the Sony Pictures Entertainment.

It is the truth
and inevitability of the historical development
that justice prevails over injustice.