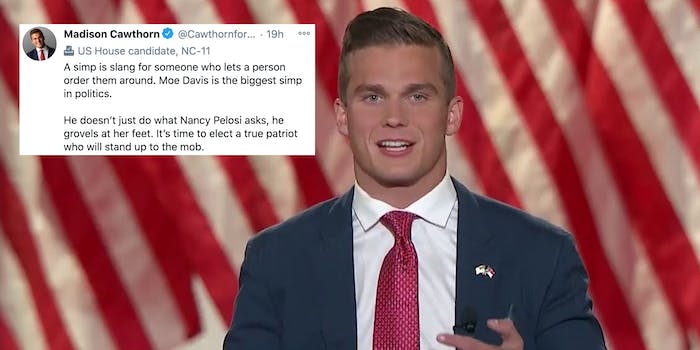 Two candidates in North Carolina are sparring on Twitter and labeling one another a “simp”—but neither politician appears to know what the term actually means.

In a tweet on Thursday, 25-year-old Madison Cawthorn, a Republican running for the 11th district’s congressional seat, called his opponent Moe Davis the “biggest simp in politics.”

“A simp is slang for someone who lets a person order them around. Moe Davis is the biggest simp in politics,” Cawthorn said. “He doesn’t just do what Nancy Pelosi asks, he grovels at her feet. It’s time to elect a true patriot who will stand up to the mob. Let’s win this.”

Davis, the Democrat running for the 11th district, shot back not long after and accused Cawthorn of not only being a simp but of failing to understand what the term means.

“‘Simp’ is short for ‘simpleton,’ meaning someone gullible; you know, a dolt who thinks the winner gets sworn in next week because he doesn’t know the difference between a special and a general election, or who thinks there could be over 500 House members after the Census,” Davis replied.

In reality, a simp is actually an individual who is overly invested and submissive to another. Although the term does derive from the word simpleton as Davis suggests, the term’s current use in popular culture is often used to describe males who give attention and money to female content creators online.

It also an acronym that stands for, in its most explicit (and explicit) definition: Sucker Idolizing Mediocre Pussy.

Internet users also use the term “simping” to express admiration for people they deem attractive.

The bizarre exchange between the two candidates, very on-brand for 2020, caught the attention of countless Twitter users.

Many pointed out that both men were seemingly clueless about the term’s current meaning.

“Zoom candidate and Boom candidate arguing over the definition of simp,” @NeoNeoConserva1 wrote, referring to the age difference between the two. “What a time to be alive.”

Others leapt to the defense of Davis, arguing that his definition was technically correct.

“Listen. Kids use simp differently…” @featherty said. “Does not mean Moe is wrong. Also Cawthorn is a monster no matter how young he is.”

Conservative supporters of Cawthorn seemed divided on the advertisement, with some applauding it while others called it “cringe.”

“This ‘simp’ stuff is cringe,” @RealSaavedra wrote. “Talk like an adult.”

Local reports describe the race between the two candidates as a “nasty campaign” filled with allegations and controversies.