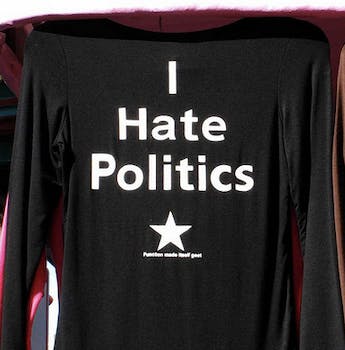 Tired of politics on Facebook? So was the developer of a new tool call Noppl, which will erase election chatter from your news feed.

With the election coming up, everybody has an opinion about today’s politics. But behind a computer screen and when emotions are running high, those opinions can sometimes be awkwardly angry, bigoted, misinformed, or all three.

Now there’s a way to bypass your relatives’ and friends’ uncomfortable political rants, at least if you’re on Facebook. A Chrome extension called noppl—short for “No politics, please”—lets you hide any and all political discussion on your newsfeed.

The simple application doesn’t come with many bells and whistles, but it does what it promises. Once you install it, it asks you to enter a few words you’d like blocked from your Facebook feed. By default, it suggests blocking “Obama, Romney, election,” and several others. Technically, you could use the program to block any words you don’t want to see.

Noppl was conceived by developer Kevin Faul, who built the extension as a personal side project in light of the upcoming election.

“I’m not against politics,” Faul told Techcrunch. “I just don’t want to be bombarded with political posts while on Facebook, and it turns out other people don’t either.”

Hopefully this makes for a more relaxing browse through your News Feed. At offline family dinners, however, you’re unfortunately still on your own.