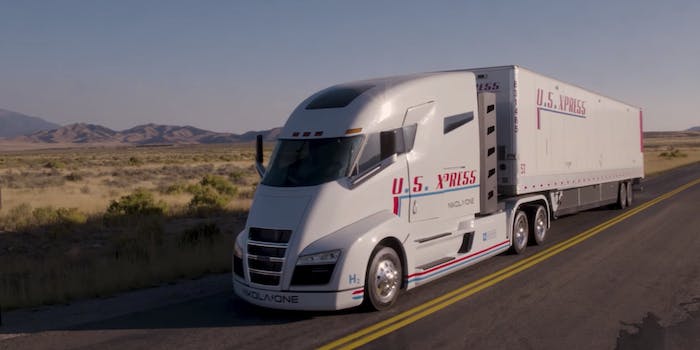 The company has been accused of filming its truck rolling down a hill and not actually driving.

An electric vehicle startup is pushing back on criticism of its 2017 promotional video by claiming that it “never stated its truck was driving under its own propulsion.”

The video in question, which showcases the zero-emission Nikola One semi-truck, has been accused of being misleading in a new report by Hindenburg Research.

Hindenburg alleged that the vehicle in the video was never actually driving on its own and was instead just “rolling down a big hill.” Incredibly, Nikola Motor Company responded to the accusation by stating that it never claimed that its truck was actually driving but that it was merely “In Motion.”

“It was never described as ‘under its own propulsion’ or ‘powertrain driven,'” the company said in a press release. “Nikola investors who invested during this period, in which the Company was privately held, knew the technical capability of the Nikola One at the time of their investment.”

Nikola goes on to argue that the three-year-old video is “irrelevant” given that it currently has “real working hydrogen fuel-cell powered semi-trucks.”

“Any reports intended to suggest that Nikola’s trucks do not drive are erroneous…” the company added, pointing readers to its latest videos showing its vehicles driving.

Criticism of the video is just one facet of Hindenburg’s report, which accuses Nikola of “an intricate fraud built on dozens of lies.”

The report caused stocks to tumble, axing more than $5 billion worth of value from the company.

Nikola has since accused Hindenburg of lying to manipulate the stock market.

“Nikola believes that the Hindenburg report, and the opportunistic timing of its publication shortly after announcement of Nikola’s partnership with General Motors Co. and the resulting positive share price reaction, was designed to provide a false impression to investors and to negatively manipulate the market in order to financially benefit short sellers, including Hindenburg itself,” Nikola said.

The company says it has contacted the U.S. Securities and Exchange Commission over the matter.