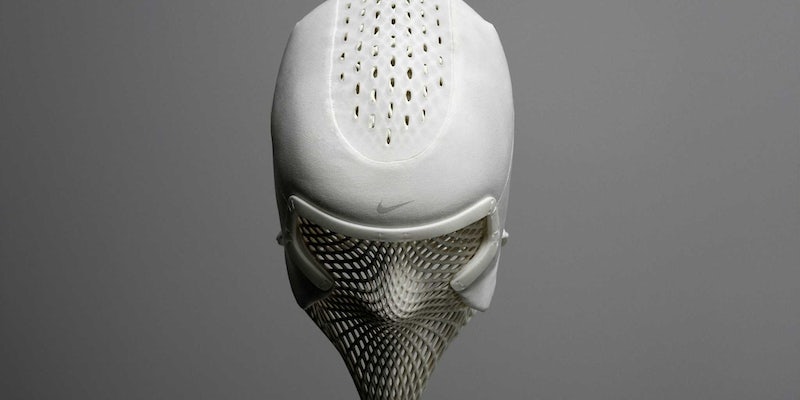 It's really cool. Get it?

Nike invented a gadget to improve athletes’ recovery time, and it’s all in the head. Well, on it, anyway. The company’s cooling hood gives athletes the feeling of having cool water dumped over their head, as if they were perpetually taking the ice bucket challenge, but with none of the mess.

The hood, developed by the Nike Sports Research Lab (NSRL) in partnership with U.S. Olympic champion and decathlon world record holder Ashton Eaton, is designed to keep the wearer’s head cool, minimizing the recovery time between events and improving performance.

“A perfect scenario would be to feel like you’ve just started on every event. The more you do, the more attrition you experience,” Eaton said in a statement. “Rather than realizing immediate physiological gain, the challenge is more about reducing the mental attrition from the two days to maximize each event.”

The prototype draws on technology in Nike’s PreCool Vest, which the company created over a decade ago to cool and regulate core temperatures.

Inner layers within the new hood are designed to retain cool water without leaking. A frame built around the eyes keeps the hood in place and ensures a proper fit. Nike extensively tested the fabric used to make the hood, calculating the headwear’s precise weight and length.

“Why does it feel good, after running, to pour a bottle of water over your head?” Eaton said. “I don’t know the physiological answer, but the fact that it does feel better makes me perform better.”

There is science to back up Eaton’s anecdotal evidence. NSRL found that the face and neck’s temperature recognition is two to five times more sensitive than in other parts of the body. When researchers at California State University in Fullerton ran tests pouring cold water over the heads of runners to test its effect on performance and body temperature, they found little change in performance but significant improvement in body temperature.

Other evidence suggests a link between cooling the head and neck area and an improvement in performance.

A Roehampton University study found that runners wearing a cooling collar could travel longer distances and exhibited lower core temperatures than those without the cooling device. Another study found that pre-cooling before an athletic event can improve performance by four percent.

Eaton, along with Canada’s Brianne Theisen-Eaton, will use the prototype cooling hood in the months to come to see if it benefits their performance. Considering that Eaton is already a world-record holder, though, the hood will be hard-pressed to make him much better.