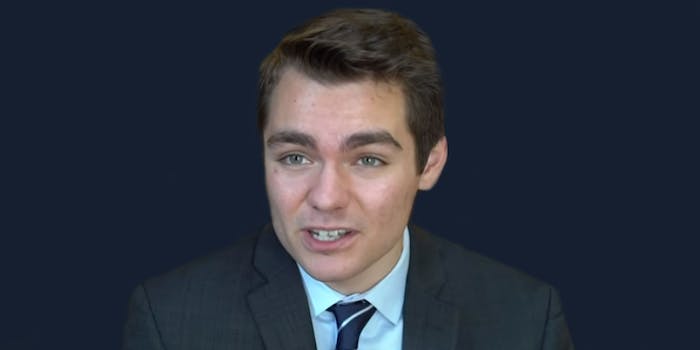 ‘Having sex with women is gay’: White nationalist incel movement is going to bizarre extremes to define straightness

It doesn't make any sense.

Nick Fuentes’ latest effort to explain why he’s definitely an involuntarily celibate heterosexual makes the least sense yet. The white nationalist said that all sexual activity is “gay,” thus celibacy is the straightest sexual orientation.

Involuntary celibacy is part of the glue that binds the far-right together. The primarily male cohort of incels congregating together online to share their anger and confusion over being shunned sexually is partly credited for the rise in extremism in recent years. The absence of romance in their lives has become a significant component of many incels’ identities.

Even among incels, Fuentes is extreme. He seems to believe that having or desiring sex would destroy him.

Perhaps this is why Fuentes has recently expended significant effort defending his incel status. When he admitted to kissing a girl in high school earlier this year, outraged fans accused him of being voluntarily celibate. In a subsequent episode of his show, Fuentes vehemently insisted that he has no desire to ever kiss a girl again. He didn’t seem to realize that this actually proves their point.

In a recent episode of his show, America First, Fuentes once again defended his honor as an incel.

His latest defense made the least sense yet.

“Gay people do date girls all the time,” he claimed. “All these gay people are coming out and saying, ‘I’ve had more girlfriends than Nick. I’ve had sex with more girls than Nick.'”

“That actually makes me really more heterosexual than anyone.”

“The only really straight heterosexual position is to be an asexual incel. That’s it. That’s all there is.”

He babbled on for a while, then concluded by claiming that all sex is “gay.”

“Having sex in itself is gay, I think. I think that it’s really a gay act. Think about it this way: What’s gayer than being like ‘I need cuddles. I need kisses … I need to spend time with a woman.’ That’s a little sus.”

Someone posted the clip in a subreddit where people make fun of right-wing figures. People were floored by Fuentes’ views on sexuality.

“Who the fuck is this, and how many times was he dropped on his head as a child?” wrote one redditor.

Another said that he had to be trolling. “Nope, he’s an actual Nazi lol,” redditor Wamb0wneD replied. (Fuentes is known to troll, but did not appear insincere in the segment.)

Some referenced recent allegations by purported former members of Fuentes’ inner circle who’ve defected and begun revealing secrets about their time with him. One claims that an enraged Fuentes searched his room with a black light, looking for semen stains in an effort to prove that he’d lost his virginity, which apparently would’ve been viewed as a betrayal.

Most people were just stunned and amused by Fuentes’ claim that having sex with a member of the opposite sex would make him gay.

“He went to the incel version of Alice in Wonderland,” wrote one.