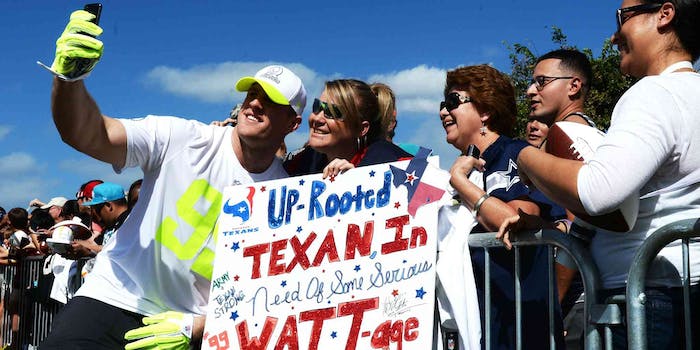 NFL partners with Snapchat for Live Stories from big games

You might be able to get a better look at the big game from your smartphone.

Most people buy a massive TV to watch their favorite football team, but you might be able to get a better look at the action on your smartphone. Snapchat and the NFL have agreed to a one-year deal to bring images and videos from games to the app’s Live Stories feature.

The deal gives the NFL’s Snapchat followers a field pass to games through this year’s Super Bowl, with at least one NFL Live Story produced each Sunday and the possibility for games on Monday and Thursday nights to get the Snapchat treatment.

Both Snapchat and the NFL will generate new ad deals off the partnership and will split the money depending on who brings the advertiser on board.

Before you ditch the TV entirely in hopes of watching games through on-field selfies taken by players, it’s worth noting the deal doesn’t cover broadcast footage. Snapchat will curate content from fans and employees in the stadium for the game, but there will be no TV-quality photos or videos in the Live Stories.

This does, however, mark the perfect opportunity for a player to revive Joe Horn’s touchdown celebration from 2003 and sneak a phone on the field. That stunt cost $30,000 at the time, but Apple or Samsung would likely shell out the cost of the fine to have their phone be the one used during a broadcast that goes out to the 17.6 million people on average who watch a regular season game. (Apple even has a precedent for it: Beats, now owned by Apple, likely paid the $10,000 fine given to San Francisco 49ers quarterback Colin Kaepernick for wearing Beats by Dre headphones instead of Bose, which has an exclusive partnership with the NFL.)

There’s some painful irony to the deal between NFL and Snapchat: Both entities share an uncanny ability to make videos disappear. Commissioner Roger Goodell reportedly ordered the destruction of 40 videos illegally recorded by the New England Patriots between the 2000 and 2007 seasons, and more recently, Goodell managed to acquire photos of star defensive end Greg Hardy attacking his girlfriend while shielding them from the public eye.