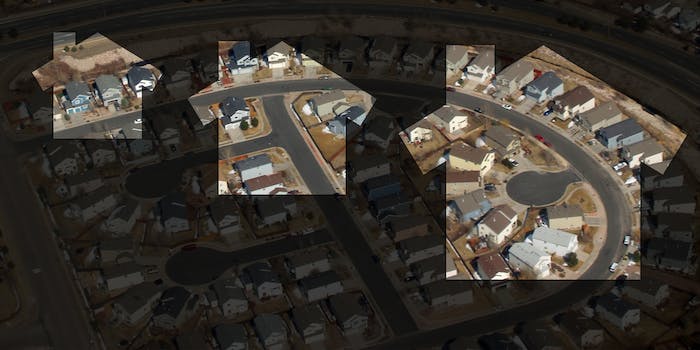 Knocking on Nextdoor, the social network for neighbors

Nextdoor does for neighbors what OkCupid has done for dating. It removes the high social stakes.

There was once a time when your social network would have been connected by landlines rather than fiber optics. When friendly games took place around a card table rather than through an app. A bygone era when the people you spoke with most often lived down the street rather than across the country.

Neighborhoods were the original social network, providing a sense of familiarity and common ground for conversation at the local playground, dog park, or bar. With the rise of Facebook, however, it’s easier than ever to stay connected with the friends you already have instead of branching out and making new ones. As a result, you’re more likely to know what your college roommate ate for lunch rather than the first names of the neighbors across the hall.

As technology allows us to connect with more people around the globe, surveys show we are becoming increasingly isolated from those around us. But that same technology may be the very thing that revives the local neighborhood.

Where nobody knows your name

“I walked out my front door three years ago and realized I recognized just one other person on my block,” Sarah Leary told me. “Something wasn’t right about that.”

Leary is the cofounder of Nextdoor, a geographically based social network that takes the concepts of online interaction pioneered by Facebook, LinkedIn, and others and applies them to neighborhoods across the country. 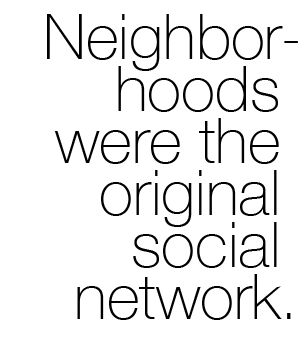 In contrast to its more established contemporaries, Nextdoor isn’t one giant network so much as a patchwork of networks. Users can only join their neighborhood by verifying their address, and they must use their real name. Their information is only available to other Nextdoor users in the area.

Leary and cofounders Nirav Tolia and Prakash Janakiraman see the site as a potential solution to a significant social problem: According to a Pew Research Center survey conducted a year before Nextdoor’s late-2011 launch, 28 percent of Americans did not know a single neighbor by name. And even though 65 percent of U.S. adults were on some form of social media in 2011, only 2 percent were Facebook friends with their actual neighbors. Those stark figures, combined with the creators’ own experiences, sparked the Nextdoor movement.

Though its initial debut was limited to the San Francisco Bay area, where Nextdoor’s headquartered, the network has quickly spread to some 24,000 neighborhoods in all 50 states, with plans to launch internationally in the near future.

Not all neighborhoods are the same, of course. Some take to it more quickly than others. That’s because Nextdoor can’t spread the same way as traditional social networks. The people Nextdoor attempts to connect often don’t know each other through other online channels, like email address books. Instead, users have to start the local network the way they would a neighborhood watch: through fliers, door-to-door greetings, or postcards to nearby addresses encouraging neighbors to join.

“Usually it takes one determined person to get it going in a neighborhood,” Leary said.

Tuscan Knox was the driving force behind the first Nextdoor neighborhood in Austin, Texas. The service provided by Nextdoor is something he said his neighborhood had been needing for a while.

“There were efforts to try and get the neighborhood connected online,” Knox said. “We’d tried using a Google Groups, but it just sort of fell by the wayside.”

Though Austin is known for being friendly, Nextdoor was welcomed as a way of breaking the ice in Knox’s neighborhood. As he put it, Nextdoor enabled “soft introductions.” When he’s out and about in his neighborhood, Knox often connects with his neighbors offline by referencing a posting or comment from Nextdoor.

Essentially, Nextdoor does for neighbors what OkCupid has done for dating. It removes the high social stakes of approaching someone out of the blue in real life.

To call Nextdoor the Facebook of neighbors would be a slight misinterpretation. The site certainly borrows from some of the ideas pioneered by Mark Zuckerberg and company, but the nature of interactions on Nextdoor are quite different.

Where Facebook interactions tend to be more purely social, communiques on Nextdoor usually revolve around solving problems. The majority of conversations—26 percent, according to the site—relate to recommendations for local services and businesses. Twenty-two percent pertain to community issues (things like trash pick-up, local happenings), while another 20 percent of conversations relate to crime and public safety. Many neighborhood watches have been organized through the site, while only 11 percent of conversations relate to social events. 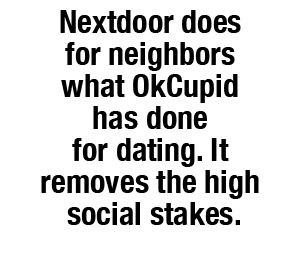 Veterinarian recommendations or warnings about suspicious vehicles may not seem particularly engaging from a social media standpoint. But these are exactly the kind of topics Leary and her partners want Nextdoor neighborhoods to be talking about.

Nextdoor’s philosophy is heavily rooted in sociological research, particularly the teachings of Robert D. Putnam, as outlined in his bestselling book, Bowling Alone: The Collapse and Revival of American Community. In studying the decline of American civic engagement at the tail end of the 20th century, Putnam delves heavily into the notion of social capital. In simple terms, social capital is the currency used in a social network, generated by people providing things for one another. Recommending a good local mechanic or collecting a neighbor’s mail while they’re out of town, for example, creates social capital—a sense of trustworthiness and reliability. And social capital, Putnam argues, is what underscores the social bonds that become the basis of community and friendship.

That’s what Knox has observed in his own Austin neighborhood, where 225 people from 140 homes are now on the local site. Though much of the early conversations revolved around social events, the site has now become the go-to place for neighbors seeking favors.

“When someone has an old piece of furniture to sell or something, they usually put it up on Nextdoor now before going to Craigslist,” Knox said.

Nextdoor hasn’t been the trendiest social media startup in recent memory, but its growth has been steady on the whole. It’s gone from under 200 neighborhoods shortly after its launch to more than 24,000 today. The site also recently earned a $60 million investment by two venture capital firms, bringing total fundraising over the last 19 months to more than $100 million.

But a closer look at the site’s growth at a microlevel reveals a little more variance. Not all neighborhoods embrace the site the same way. Though Knox’s south Austin neighborhood took to the site quickly, others take more time to grow. My neighborhood, on Austin’s northside, has seen slower growth. At present, there are just 14 members. Only one new person joined since I started working on this story in late October—despite living in an area with several large apartment complexes in addition to some private homes.

I asked Leary about the variation in Neighborhood growth and she pointed out some of the key factors that define more robust Nextdoor networks. For instance, the high number of apartment renters (and the associated residential turnover) in my neighborhood are likely responsible for inactivity on my own Nextdoor site. Leary said Nextdoor primarily appeals to long-term residents.

Though anyone over the age of 18 can sign up for the site, Leary said the network’s prime demographic is between 25 and 40. That’s a little older than the generation traditionally associated hot new social media networks, but Leary says these are the folks who are settling down and want to invest in the community.

“That’s the age where people want to start putting down roots,” Leary said. “We’re trying to create the common ground for that to happen.”