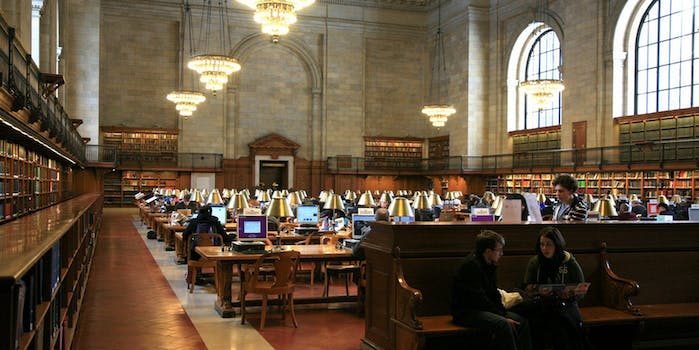 In a sign of just how integral the Internet is in the present age, the New York Public Library is poised to begin lending free, high-speed Internet hotspot devices to its patrons, helping to bridge the digital divide that separates the rich and poor.

With the aid of a $500,000 grant from the John S. and James L. Knight Foundation, the library will purchase thousands of mobile hotspots to lend out to patrons. This will allow any member of the library system in New York to access high-speed Internet at home for free. The program will begin in the Fall.

Though libraries are traditionally thought of as the home for stacks of old, musty book and periodicals, they’ve become a critical resource for members to connect to the Internet when they otherwise would not have access. Already, the NYPL, like thousands of others across the country, allow users to go online via computer terminals at the library branches themselves.

Due to high demand, however, the NYPL currently limits users of its computers to 45 minutes online each day. According to a recent survey by the library, this simply isn’t enough.

The library found that 55 percent of patrons who used library computers did so because they had no home broadband access. And among patrons making less than $25,000 a year, that figure rose to 65 percent.

“In a world where access to the Internet is necessary for almost any important task – applying for jobs, doing school work, paying bills – it is unacceptable that so many of the most vulnerable New Yorkers would be left behind,” NYPL President Tony Marx said in a statement.

The library recently conducted a pilot program that lent Chromebook laptops and mobile hotspots for two months at a time to 100 families with children in after-school programs.

One of the participants in this pilot program, Nashawn Smith, a mother from the South Bronx, told AM New York that the program was an immense help for her 10 year old daughter, Ajanay, who previously had to go to the library anytime she needed to use the Internet for homework.

“After your 45-minutes was up, you couldn’t get back on. Now she can do her work at home: She reads on it all the time,” said Smith, who has also found the device useful for finding employment.

The need for this library program speaks to the challenges many American’s face in trying to access the Internet. Though it may be hard for many to fathom, just 62 percent of the U.S. population have access to and are using high-speed Internet connections, according to the FCC’s most recent Broadband Progress Report from 2012. That means that roughly 119 million Americans still aren’t using broadband, either because they choose not to or they can’t afford it. For some 19 million Americans, most of whom live in remote rural areas, the infrastructure is simply not available.

For those American’s who want broadband access at home but don’t have it, cost is the most prohibitive factor. Compared to the rest of the industrialized world, Americans often pay more and get less when it comes to broadband. The U.S. ranks 30th in the world for average broadband speeds, lagging behind countries like Iceland, Romania, Russia, France and the U.K. But on average, Americans pay $55 a month for their relatively slow Internet connections. This is more than what customers pay in France, Russia and Great Britain, where average costs is less than $45 a month.

Many blame the high cost of Internet access in America on the few companies that currently monopolize the market and limit competition. And many fear things will only get worse with the announced merger between the two largest broadband providers, Comcast and Time Warner Cable. Already, Comcast has floated the idea data caps that would charge customers an additional fee if they consume more than 300 GB of data in a month.