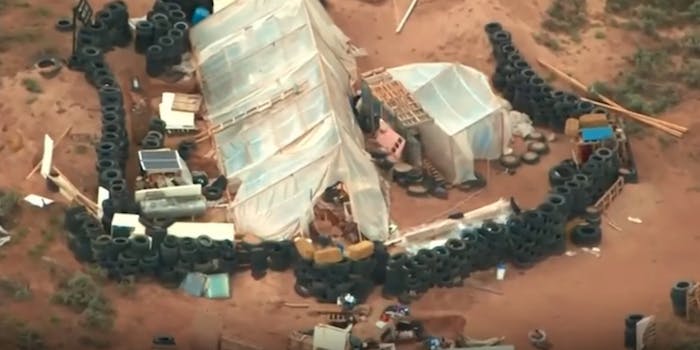 Man accused of training children to carry out school shootings

Five people have been arrested.

Siraj Ibn Wahhaj is alleged to have been conducted weapons training on the compound premises, near the state’s border with Colorado, where law enforcement rescued 11 malnourished children ranging in age from around one to 15.

Law enforcement say that the children were found to have “no food or fresh water… no shoes … and [wore] basically dirty rags for clothing.”

As well as Wahhaj, four other adults were arrested when the property was raided on Friday: Wahhaj’s brother-in-law, wife, and two sisters. All of them now face child abuse charges.

Wahhaj, 39, is also the father of missing the-year-old Georgia boy Abdul-ghani Wahhaj. The boy, who suffered from seizures and severe medical issues that required daily medication, was last seen in December with Wahhaj, who claimed he was taking his son to the park.

The remains of a child were found at the compound but medical examiners have yet to acquire an identification.

Taos County Sheriff Jerry Hogrefe said that Wahhaj was “heavily armed with an AR15 rifle, five loaded 30 round magazines, and four loaded pistols, including one in his pocket when he was taken down.”

The group had moved down the town of Amalia in December but the disheveled compound, barricaded by tires and wood, had become a concern to locals who reported it to authorities. Law enforcement say that there was very little food on the premises and believe they have found a shooting range on-site.

The Daily Mail has identified Wahhaj as the son of prominent imam of a mosque in Brooklyn, New York City. Following the 1993 bombing of the World Trade Centre by Islamic extremists, Wahhaj’s father was one of 170 people identified by a federal judge in 1995 as “unindicted persons who may be alleged as co-conspirators.”

The imam was not charged with any crime and repeatedly denied involvement in the World Trade Center bombing. Authorities are yet to confirm the family link but conservative pundits online have readily assumed its relevance.

The father arrested at this compound is reported to be the son of the character witness for the blind sheikh, one of the unindicted co-conspirators in the 1993 WTC bombing: https://t.co/n4YgPAfi1M

Wahhaj is being held without bail.