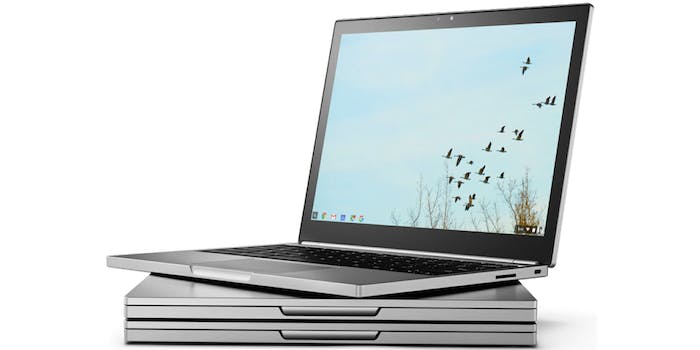 This fall, Google could be introducing a suite of new hardware, including a third-generation Chromebook Pixel laptop, and a smaller Google Home.

Google hasn’t debuted a Pixel-branded laptop since 2015. According to Android Police, this new Chromebook could have risen from a Google development code-named Project Bison. Project Bison, slated for a Q3 2017 debut, detailed a high-end laptop running a custom version of Android dubbed Andromeda. Android Police’s sources report, however, that the laptop arriving this fall will be a Chromebook.

Google refused a request by the Daily Dot to comment on the Android Police report, saying that it does not comment on rumors or speculation.

If this alleged new Chromebook Pixel shares the specs of the old Project Bison, then it could feature a 12.3-inch screen, with options for 8GB or 16GB of RAM and 32GB or 128GB of storage. It may also be ultra thin (less than 10mm thick), with the ability to fold into a tablet mode. It could debut for $799.

Google effectively abandoned its Chromebook Pixel line in late 2016. The second generation Pixel, while an excellent quality aluminum-bodied laptop, may have suffered due to its $999 price tag. For many eyeing a Chromebook as their next computer purchase, that price was just too tough to swallow. And for those looking for a more premium laptop, a Mac or Windows machine made more sense.

Alongside this new laptop, Google may also debut a new, smaller version of its Google Home smart home speaker. While the original Google Home takes aim at Amazon’s Echo, this smaller model would be more of an Echo Dot competitor.

We’re already expecting Google to debut a pair of new handsets this fall: the Pixel 2 and XL2. Reports of these devices are causing waves of their own because they may not include a headphone jack.