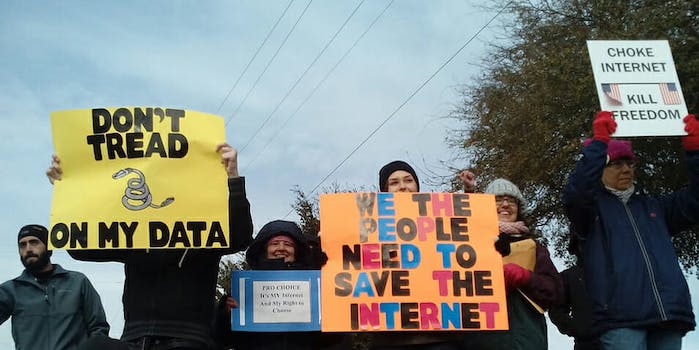 What you need to know about today’s net neutrality repeal

Here's what you need to know about today's repeal of net neutrality.

While some people may declare net neutrality “dead” because the repeal is now in motion, there are still several avenues being explored by activists, advocates, states, and even Congress to save net neutrality rules, which were enshrined in 2015 and made sure all internet traffic is treated equally.

There might be a lot of doom-and-gloom among portions of the internet, there is still long road ahead in the fight to save net neutrality.

In December, the FCC—headed by Chairman Ajit Pai—voted down party lines to repeal net neutrality rules despite immense public backlash ahead of the vote. The repeal set in motion a series of events that culminates today when the FCC’s “restoring internet freedom” order officially goes into effect today.

The repeal needed to get approved by the Office of Management and Budget, and got that approval last month.

“Starting today, there is nothing legally preventing companies like Comcast, Verizon, and AT&T from arbitrarily censoring entire categories of apps, sites, and online services, or charging internet users expensive new fees to access them,” Evan Greer, the deputy director of Fight for the Future, said in a statement. “Ajit Pai’s order hands our internet providers complete control over everything we do on our phones and computers, from where we get our news and information about the world, to how we listen to music and stream video.”

2) What kind of changes could happen because of the repeal?

Net neutrality advocates warn that without the rules, which placed ISPs under Title II of the Communications Act, ISPs have nothing stopping them from blocking content or speeding up or slowing down internet access at their own discretion.

Pai tried to quell those notions ahead of the FCC’s vote last year when he starred in a much-mocked video produced by the right-wing website the Daily Caller.

Without the rules, advocates say, ISPs can bundle access to certain websites in an internet plan and charge consumers more to visit large traffic-intensive websites. Another fear is that ISPs no longer have rules that bar them from slowing down some websites and speeding up others. For example, an ISP could slow down access to Netflix in favor of their own streaming service.

Advocates have also pointed out that fears of “paid prioritization,” or ISPs creating a “fast lane” for companies and consumers who pay more, could wreak havoc on communities of color and other disenfranchised communities who have used the internet to organize and communicate in ways that were blocked in the past.

While ISPs will technically have free reign to slow down, speed up, or block internet content at their will starting today, the American Civil Liberties Union (ACLU) pointed out last week that those changes may not be visible starting immediately.

However, with so much activism—not to mention broad bipartisan support for net neutrality laws—giving attention to the issue, the organization said it’s likely ISPs wouldn’t begin making noticeable changes when a spotlight is on them.

“Their wisest course of action will be to eliminate net neutrality like a slow drip over time in the hope that consumers won’t notice and will stop caring,” Char Marlow, an advocacy and policy counsel at the ACLU, wrote, adding: “After some time has passed, they will point to their inaction as proof we were wrong to distrust them and their promises not to violate net neutrality in the absence of a federal mandate. And guess what will happen next? Drip. Drip. Drip. And before we know it, a flood will have washed away the free and open internet we all rely on.

Greer, from Fight for the Future, had similar sentiments.

“Cable and phone companies won’t start misbehaving right away, because they know they’re being watched,” Greer said. “But over time, unless net neutrality is restored, the internet as we know it will wither and die. The web will be dominated by a handful of the largest platforms who can afford pay to play fees, squeezing out independent voices and innovative ideas. We’ll lose all the cool, weird, controversial, and unexpected stuff that makes the Internet awesome, and one of the most important tools we have to combat tyranny and expose corruption.”

4) Does this mean efforts to save net neutrality are over?

While today marks a major step back in the fight to save net neutrality, activists are saying the war is far from over.

Last week the coalition of advocacy groups that make up Team Internet said they are using the repeal officially going into effect to begin a new online-protest to inform internet users about ways to help save net neutrality.

The protest asked people to harness “whatever corner of the internet that you control” to push support for an effort in Congress to overturn the FCC’s decision using the Congressional Review Act (CRA). The group is giving people social media avatars, plugins for websites, and images to share that direct people to contact lawmakers and ask for their support for the CRA.

The CRA is a mechanism in Congress that gives them the authority to overturn federal agencies decisions in a certain time frame. Both the Senate and the House of Representatives need just a simple majority to pass motions to overturn the FCC’s net neutrality repeal.

The push began in earnest last month when the Senate voted 52 to 47 to pass its CRA motion. The fight will now head to the House of Representatives, where it will need 218 votes to pass. Currently 171 representatives have voiced their support for it, according to a scorecard of legislators compiled by Battle for the Net.

“Now it’s up to Representatives to follow suit and overturn the FCC’s disastrous repeal of net neutrality, which will cut off small businesses’ ability to reach customers, harm rural communities that lack choice in internet providers, and negatively impact all who rely on an open internet for news, speech and entertainment,” Mark Stanley, the communications director for Demand Progress, said in a statement.

Last week dozens of senators wrote a letter to House Speaker Paul Ryan (R-Wisc.) urging him to schedule a vote in the House on the CRA.

“Now that the Senate has taken this critical step, it is incumbent on the House of Representatives to listen to the voices of consumers, including the millions of Americans who supported the FCC’s 2015 net neutrality order, and keep the internet free and open for all,” the letter said.

If successful in the Senate and House, President Donald Trump would need to sign the CRA.

5) What states are pushing back?

Congress isn’t the only place where efforts to save net neutrality have begun.

Additionally, major tech companies like Mozilla, Etsy, Kickstarter, Foursquare, Shutterstock and others have also sued the FCC in the wake of its decision to repeal net neutrality rules.

Other advocacy groups, including the National Hispanic Media Coalition, have also taken the FCC to court regarding the repeal.

Meanwhile, several states have also taken the net neutrality fight into their own hands.

In late May, California’s state senate passed what internet rights groups called the “gold standard” bill that would enshrine net neutrality within the state. The bill, which needs to pass through the state’s Assembly and be signed by Gov. Jerry Brown (D), would prevent ISPs in the state from blocking, slowing down, or speeding up internet traffic.

Other states, such as Washington, Montana, New Jersey, New York, and Hawaii have passed net neutrality legislation or used executive orders to protect net neutrality within their states.

6) What’s next in the fight to save net neutrality?

Much of the focus moving forward will be on getting members of the House of Representatives to sign onto the the CRA.

Internet rights advocates told the Daily Dot in May that they will organize both online and in-person protests to try and convince lawmakers to support the effort to overturn the FCC’s decision.

If every Democrat supports the CRA in the House, just like their Senate counterparts did, it would only require 25 Republican votes to pass. In the Senate, several Republicans broke ranks and voted in favor of the CRA.

Rep. Mike Doyle (D-Penn.), a co-sponsor of the House CRA, told the Daily Dot earlier this year that grassroots organizing and protests would help give them “a real shot at getting this thing out of the House.”