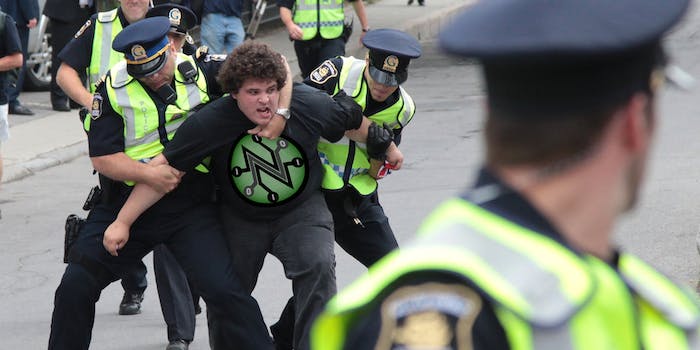 "We're here to get Google to take action for net neutrality."

When is the battle for net neutrality something truly serious? Is it when people start going to jail?

Ten people were reportedly arrested Tuesday night in connection with a protest against Internet providers being able to charge more to access certain sites at full speed.

The protesters were part of Occupy Google, roughly 20 people who camped out on the company’s Google’s Mountain View campus to raise awareness that the Federal Communications Commission (FCC) could effectively end net neutrality after the current period of public comment ends July 15.

It may seem an odd choice: Google is already a vocal proponent for net neutrality, but that’s kind of the point. Organizer Zaigham Kabir told the Mountain View Voice that they wanted the company to do more, as it did with the Stop Online Piracy Act (SOPA) in 2012. “We’re not here to protest Google,” he said. “We’re here to get Google to take action for net neutrality.”

But that night, things got heated, as captured on Occupy Google’s Twitter feed.

Cops say if you don’t leave we are forced to arrest you at #OccupyGoogle pic.twitter.com/qFG0cjWTU0

Threatening arrests if people are not off grounds by 11:40; aggressive and unreasonable #OccupyGoogle pic.twitter.com/9LFXD2x1gy

Occupy Google put the final tally at 10 people arrested in the crackdown. Google didn’t respond to request for comment. The Daily Dot attempted to reach the Mountain View police department, but its communications office referred media calls to voicemail, which was full.

Photo via Jonathan Wagner (CC BY 2.0) | remix by Jason Reed