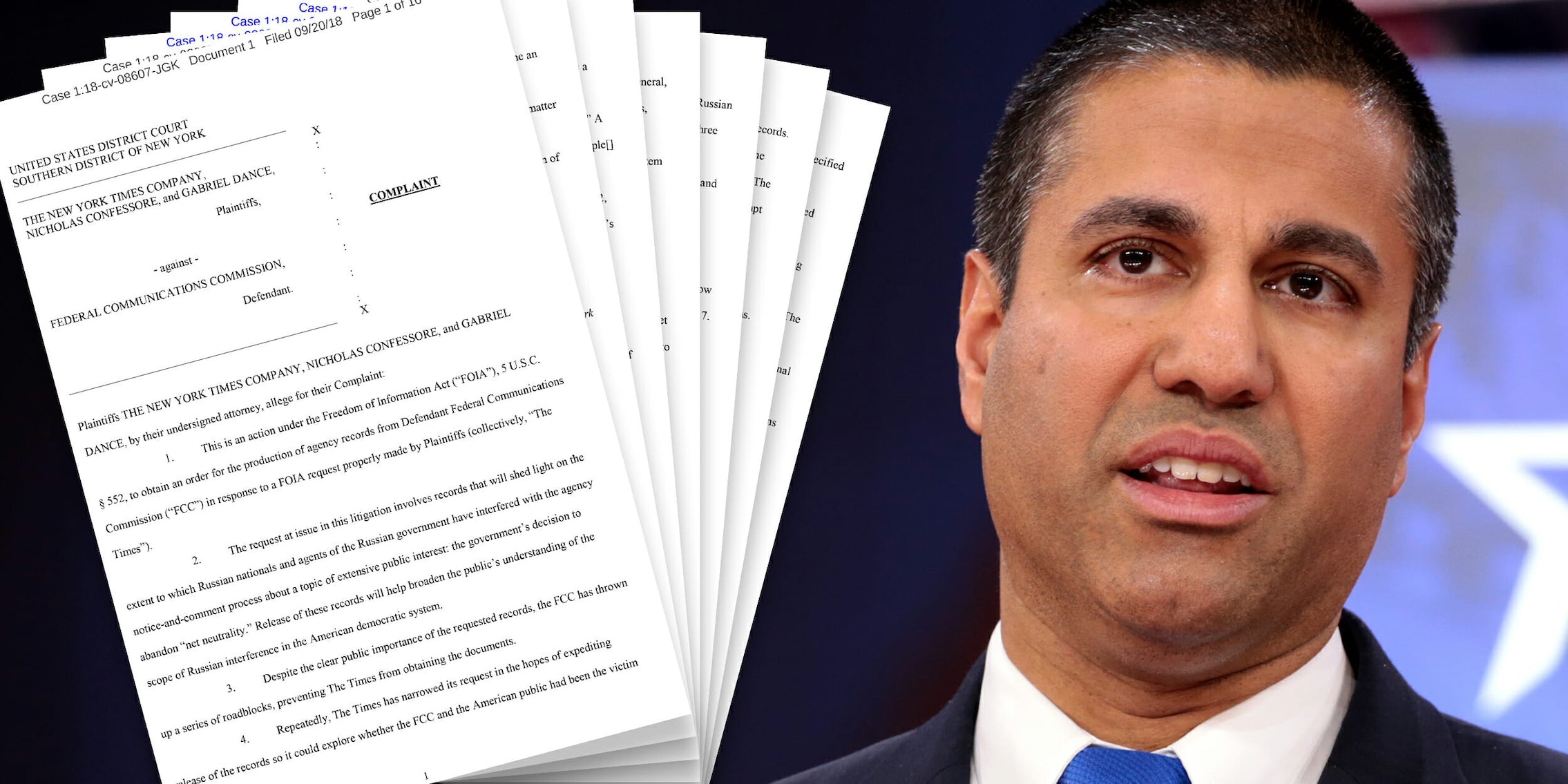 The Times says the records will 'shed light' on Russia's use of fake comments ahead of the FCC's net neutrality vote.

The Federal Communications Commission (FCC) is being sued by the New York Times for access to records surrounding the public comments submitted to the agency ahead of its controversial vote to repeal net neutrality protections last year.

The Times alleges in its complaint, which was filed in the U.S. District Court for the Southern District on Thursday, that the records will “shed light on the extent to which Russian nationals and agents of the Russian government have interfered with the agency notice-and-comment process about a topic of extensive public interest: the government’s decision to abandon net neutrality.”

According to the complaint the FCC “has thrown up a series of roadblocks” as the Times has attempted to get the records—including web server logs—through the Freedom of Information Act (FOIA).

The agency’s public comment system has been the subject of intense scrutiny by lawmakers and activists in the wake of its decision to rescind net neutrality rules.

Ahead of the vote, the comment system was flooded with comments both for and against the agency’s proposal to roll back the 2015 Open Internet Order and replace it with the Restoring Internet Freedom order.

In May 2017 the FCC said it was hit with a distributed denial-of-service attack (DDoS) shortly after Last Week Tonight host John Oliver asked his viewers to leave comments in support of net neutrality. However, last month FCC Chairman Ajit Pai admitted that the agency was never hit by a DDoS attack and blamed an employee for providing “inaccurate information.”

Lawmakers have also called on the FCC to investigate millions of fraudulent comments that were left on its website ahead of the net neutrality vote. Sen. Jeff Merkley (D-Ore.) and Sen. Pat Toomey (R-Pa.) sent a letter to the agency in May that claimed their identities were fraudulently used to comment ahead of the vote.

There were also reports of dead people’s names being used to leave comments.

In the complaint, the Times alleges that there were even more problems. A large portion of comments were “submitted by automation,” according to the complaint, and “some of these automated messages originated from Russia.”

In a separate case, a judge in the U.S. District Court for the District of Columbia ordered the FCC to hand over some data regarding the fake comments submitted ahead of the net neutrality vote.

TechDirt reports that the FCC will have to hand over email addresses that were used to submit CSV files and bulk comments. However, as the news outlet points out, the order does not require the FCC to hand over web server logs, similar to what the Times is seeking.