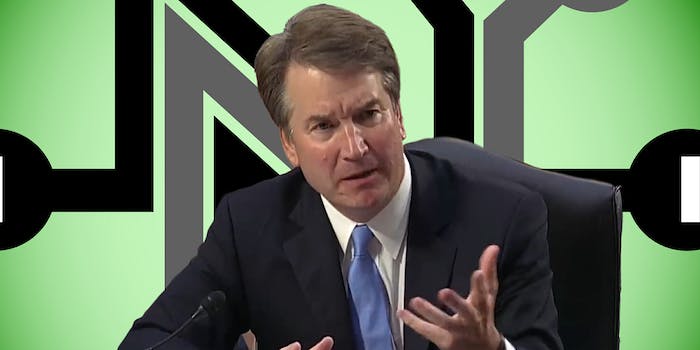 Despite promises, Democrats let him slide.

It’s no secret that Democrats were attempting to press Supreme Court nominee Brett Kavanaugh on a laundry list of topics during his confirmation hearings last week. Yet one issue that initially seemed like it would be part of their pushback, net neutrality, was scarcely mentioned at all over the hours of testimony.

Last month several Senate Democrats criticized Kavanaugh’s views on net neutrality, highlighting a dissent he wrote in a case that upheld the 2015 Open Internet Order, the Federal Communications Commission (FCC) rule that enshrined the internet protections and was rescinded last year by the Republican-controlled agency.

Kavanaugh’s appointment to the Supreme Court was high stakes for many reasons, Democrats argued, including the future of net neutrality.

Sen. Edward Markey (D-Mass.) told reporters that the “fate of the internet” would be decided in the nation’s highest court, and having Kavanaugh—who argued in his dissent that the First Amendment rights of internet service providers were violated by the Open Internet Order—as one of those who would decide the internet’s fate could lead to the death of the protections “forever.”

Meanwhile, Sen. Richard Blumenthal (D-Conn.)—the only senator who criticized Kavanaugh’s net neutrality views last week and is also on the Senate Judiciary Committee that questioned him—warned that Kavanaugh would “cripple” net neutrality for “decades to come.” He also promised to question the nominee “about his views on this supremely important topic.”

Yet, after hours of testimony, and several rounds of questions from Democrats, it appears that Sen. Amy Klobuchar (D-Minn.), a vocal proponent of the protections, was the only one to grill Kavanaugh on his views on net neutrality.

While there may have not been much talk about the internet protections during Kavanaugh’s multi-day hearing, there is quite a bit of chatter about his views online. In fact, all 10 Democrats who sit on the Senate Judiciary Committee voted in favor of an effort to overturn the FCC’s net neutrality decision using the Congressional Review Act (CRA) and have spoken publicly about its importance.

Blumenthal, who said he would question the nominee about net neutrality late last month, touched on abortion, gun reform, and other topics—but did not mention the internet protections during his questioning. Blumenthal’s office did not respond to a request for comment by the Daily Dot.

‘Kavanaugh’s stance on net neutrality should not be overlooked’

Organizations that have advocated for net neutrality protections to be reinstated believed that Kavanaugh’s stance on the issue should be highlighted during the multi-day hearings.

Fight for the Future, an internet rights group, has promoted a petition asking people to tell lawmakers to vote against Kavanaugh, arguing that he would “put telecom giants before Internet users and could kill any net neutrality rules that make it to the country’s highest court.” The petition continues: “[I]f Brett Kavanaugh is nominated to the Supreme Court, he could truly send it to its grave.”

Mark Stanley, the director of communications at Demand Progress, said it was right for Democrats to ask the nominee about a number of issues including women’s rights, money in politics, and the environment, but warned that Kavanaugh’s “stance on net neutrality should not be overlooked.”

“At the end of the day, to effectively organize for our rights—the very rights a Kavanaugh appointment would directly threaten—an open internet, free from censorship and monopolistic gatekeepers, is vital. Kavanaugh’s stance on net neutrality and his belief that the ability of a handful of giant ISPs to block content outweighs the free expression interests of hundreds of millions of people is ludicrous and dangerous,” Stanley told the Daily Dot in an email last week.  “Senators should take into account Kavanaugh’s opposition to net neutrality as one of the many reasons to use every tool at their disposal to stop his nomination.”