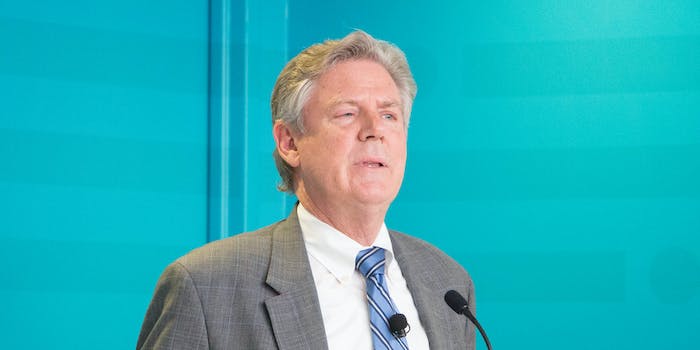 The congressman said it could be either through Congress or the FCC.

Rep. Frank Pallone (D-N.J.), the chair of the House Energy and Commerce Committee, said that he wanted to reverse the Federal Communications Commission’s (FCC) repeal of net neutrality, but was uncertain how exactly that would happen.

Pallone made the remarks on Tuesday at the INCOMPAS Policy Summit. The Energy and Commerce Committee has oversight jurisdiction over the FCC and any potential net neutrality bill would likely go through the Committee’s communications and technology subcommittee.

Ever since President Joe Biden was elected, it has been assumed that net neutrality restoration would be among the top tech policy priorities for Democrats. That restoration could come through the FCC reversing its 2017 repeal of the rules, or through a bill in Congress—which many experts and tech advocates have said offers a more permanent solution to the issue.

On Tuesday, Pallone signaled that restoring the rules was on the horizon. The New Jersey lawmaker noted that Biden’s Department of Justice withdrew its lawsuit against California over the state’s net neutrality law on Monday, calling that move “significant.”

Pallone also noted that while restoring the rules was something he wanted to pursue, it was unclear how exactly it would happen.

“We want to bring back net neutrality,” Pallone said. “We’ll see if it’s going to be done through the FCC or through legislation. But we definitely want to bring that back.”

Pallone’s remarks echoed Sen. Ed Markey (D-Mass.), a longtime supporter of net neutrality, who also noted that he would push for net neutrality to be restored. The Massachusetts senator also said that the restoration could come either through Congress or the FCC.

“The ultimate lasting solution has to be the right solution to protect online innovation and activism and maintain the internet as we know it,” Markey said on Monday, adding: “In the short run, whether it’s by enacting my Save the Internet Act, or by action at the FCC, we need to just quickly give authority over broadband back to the commission and reinstate strong prohibitions on blocking, throttling, and paid prioritization. And we need to just reverse the wrongheaded decisions of the Trump Federal Communications Commission. That’s what I’m going to be working to advance.”

While the prospects of a net neutrality bill in Congress remains unclear, Biden has begun to face pressure to fill out the FCC by nominating a fifth member. The five-person agency currently only has four members, so Biden’s nominee would give Democrats the needed 3-2 majority to vote on major issues like net neutrality.

Last month Biden named Jessica Rosenworcel, a Democrat, the acting chair of the FCC. Rosenworcel strongly opposed the agency’s repeal of the rules back in 2017,