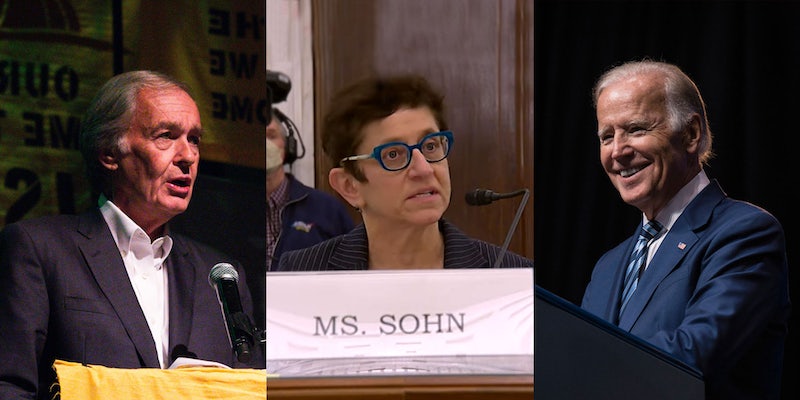 For internet freedom, the road back is longer than ever.

The fight over net neutrality is set to be renewed on Capitol Hill. But it very well could be a brief one.

Sens. Ed Markey (D-Mass.) and Ron Wyden (D-Ore.) and Rep. Doris Matsui (D-Calif.) are reportedly set to introduce legislation that would restore Title II authority to the internet, allowing the Federal Communications Commission (FCC) to regulate it like other public utilities

Legislation could be introduced as soon as August, according to the Verge.

But with a split Senate, looming elections, a still-unconfirmed FCC commissioner, and a president who has remained largely silent on the battle for internet rights, any effort introduced to protect the internet faces long odds.

Net neutrality rules were first codified in 2015 by the Obama-era FCC. It banned blocking and throttling of data, treating all internet traffic the same way, promising that the internet would remain open and free for all.

Under then-President Donald Trump, the Ajit Pai-led FCC repealed net neutrality in December 2017, an appeasement to big telecom, which found the rules costly and cumbersome. That repeal kicked off a five-year long battle. It’s mostly played out in courts, but Democrats’ efforts in Congress are instructive in showing how futile this new bill might be.

When the Save the Internet Act was introduced in 2019—the last Democrat-led bill to fight the FCC’s repeal of net neutrality—the party couldn’t even muster the full support of its caucus.

Sen. Kyrsten Sinema (D-Ariz.) was the only Democrat not to co-sign the bill, bucking her party and signaling she wouldn’t approve of any effort to support net neutrality. Previously, some Republicans had given their support to repeal the FCC’s ruling, as three signed on to a Senate Congressional Review Act that would have reinstated net neutrality over the Trump FCC’s wishes.

With those three Republicans, plus Sinema, there was potential then to get a bill to the House, which had been taken back by Democrats.

Sinema, though, instead chose to form an alliance with Sen. Roger Wicker (R-Miss.) aimed at finding a “bipartisan solution” to net neutrality. It’s a working group that, as far as anyone can tell, hasn’t produced a single potential solution for reinstating net neutrality, save for stalling Democrat-led efforts.

That Sinema would ally with someone like Wicker, who has been a strong opponent of Title II-centric net neutrality legislation, indicates just how adamant her stance in fighting any new bill could be. And hers is a vote that is essential in a 50-50 Senate.

And that thin margin presents hurdles that the Democrats have already shown they are unable to surmount. The fight over that legislation could mirror the same difficulties Democrats are having in shifting the makeup of the FCC to a pro-net neutrality majority, as Gigi Sohn has floundered on Capitol Hill.

When then-President Joe Biden nominated Sohn for the last and decisive seat on the FCC, it was hailed as a “dream team” for the internet. The plan was ostensibly simple. Sohn would be approved to the FCC. The agency would reinstate net neutrality rules. And the Senate would then permanently codify them into law.

Sohn was nominated in October. She still hasn’t made it through the Senate.

As internet rights advocates lauded Sohn for her strong track record of protecting internet freedoms and fighting for net neutrality, even in the minority, Republicans have stalled her nomination.

The GOP forced a second hearing for her, pushing back the timeline the FCC could even begin to work on net neutrality. Now, even though she’s been approved by the committee, she hasn’t received a full Senate vote. And it’s unclear when or if she’ll get one.

Without Sohn, the FCC would be toothless to enforce any authority given to it by Markey, Wyden, and Matsui’s bill.

And like Sinema’s fight against the Save the Internet Act, Democrats have faced additional opposition from their ostensible base over Sohn as well.

That a former Democrat would advocate against Sohn highlights another pressing concern progressive Democrats face in trying to push a net neutrality bill. The party is still hopelessly intertwined with big telecom companies, wherein campaign donations help set the stage for a willful inertia on the matter.

It begins at the top of the party. President Joe Biden has never been particularly interested in bringing back net neutrality, despite it being part of the Democrats’ platform.

Biden kicked off his presidential campaign with a fundraiser held by Comcast, which opposes the reinstatement of net neutrality. While campaigning in 2020, Biden remained silent on net neutrality despite other candidates’ pledges to bring it back. Biden’s campaign only offered a stance on net neutrality after the Daily Dot asked the campaign for an answer. It said he “supports net neutrality” and was “outraged” over the repeal.

And while Sohn was seen as an inspired, progressive pick by many, Biden also waited nearly a year to nominate her to the FCC, angering many digital rights advocates in the process with the delay.

If the FCC were to try and reinstate net neutrality, the process could take up to a year-and-a-half. Even if Sohn were approved today, the potential for its return could be pushed back to 2024, meaning that Biden mostly likely will go an entire first term without acting on the matter.

And given his tepid response to net neutrality as a whole, there’s still no guarantee he would sign a bill. While one might expect outrage from his base if his party were able to force a bill through Congress and Biden left it in his pocket, Biden had often copped to a conciliatory desire to pull his party back to the center to appease Republicans.

But even getting a bill to Biden’s desk is an improbability.

With the 2022 midterms looming, Congress has both the entire month of August off, as well as two weeks at the end of October and beginning of November as the election approaches. That narrow window doesn’t bode well to get a bill through committee and both chambers of Congress, especially when Republicans are expected to fight it every step of the way.

It’s projected that Republicans will at least take back the House of Representatives, as Democrats and Biden’s poll numbers are in the tank. Even if Democrats keep the Senate, any bill they are able to pass out of there would immediately die in the opposite chamber.

Believing that Republicans would concede on the fight they’re so close to winning is dubious is preposterous.

And, on the chance Democrats lose the Senate as well, Sohn’s nomination will be completely dead. Republicans in Congress would have the option of forcing Democrats to nominate a person more palatable to their pro-big telecom agenda, who wouldn’t vote with the two Democrats on the FCC in favor of restoring net neutrality.

Or they could simply stymie any Biden nominee and keep the FCC gridlocked until a Republican took back the White House.

Meaning that, given the years of delays in getting Sohn off the ground, and waiting to drop a bill until mere months before a midterm election Democrats a set to be swept in, the net neutrality effort just might be completely dead.

Markey, Wyden, and Matsui did not respond to requests for comment