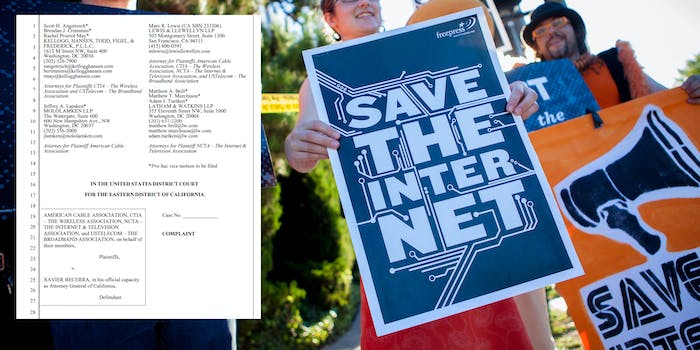 It's the second lawsuit this week.

Several major telecom industry groups have joined the United States Department of Justice in suing the state of California over its recently-passed net neutrality law.

The lawsuit, filed on Wednesday in United States District Court for the Eastern District of California, was brought on by the American Cable Association, CTIA–The Wireless Association, NCTA– The Internet & Television Association and USTelecom–The Broadband Association.

The lawsuit alleges California’s net neutrality law—which was heralded by advocates as the “gold standard” for states looking to enact their own protections in light of the Federal Communications Commission (FCC) rescinding net neutrality laws nation-wide last year—is a “classic example of unconstitutional state regulation.”

“This statute was purposefully intended to countermand and undermine federal law by imposing on bias the very same regulations that the [FCC] expressly repealed in its 2018 Restoring Internet Freedom Order,” the suit reads.

The suit argues that California’s law is preempted under the Constitution. (Read the full lawsuit here.)

Meanwhile, net neutrality advocates said the latest lawsuit was evidence that the repeal of net neutrality by the FCC last year was done for the benefit of ISPs.

“Big telecom companies hate the California net neutrality bill because it prevents them from screwing over their customers more than they already do,” Evan Greer, deputy director of Fight for the Future, said in a statement. “It’s no surprise that they’re suing, but it does make it even more blatant and clear that Jeff Sessions and Ajit Pai are working directly on behalf of Big Cable in trying to block basic consumer protection legislation that passed with overwhelming bipartisan support.”

The lawsuit from the telecom groups comes on the heels of the Justice Department announcing its own lawsuit against California over the state’s net neutrality law.