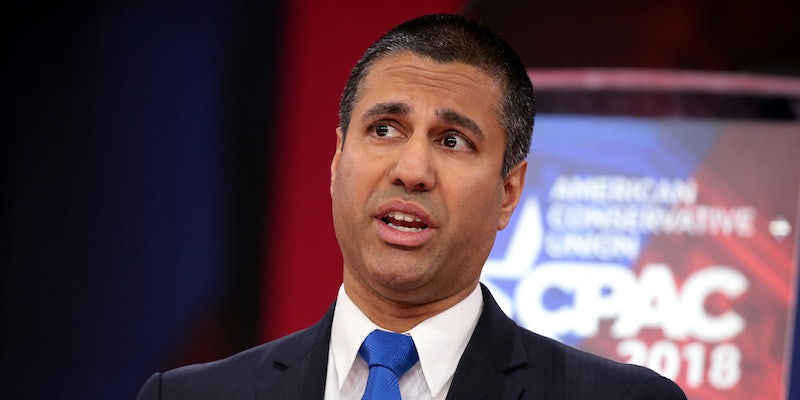 Congress' effort to reinstate net neutrality is over for now.

In a statement, Pai applauded the end of Congress members trying to use the Congressional Review Act (CRA) to overturn the FCC’s net neutrality vote. The CRA gives Congress the ability to overturn decisions made by federal agencies within a certain time frame.

The effort was able to pass through the Senate last summer before stalling in the House of Representatives.

The House version needed a simple majority of signatures on a “discharge petition” to force a full vote. Ultimately, 182 lawmakers signed the petition, leaving it 36 votes shy of reaching the simple majority. If it had been successful, the president would have also needed to sign it. Only one Republican joined the effort in the House.

The effort did not get the needed number of signatures before its deadline as a new roster of lawmakers takes over Congress. It cannot be revived by a Democratic-controlled House.

“I’m pleased that a strong bipartisan majority of the U.S. House of Representatives declined to reinstate heavy-handed internet regulation. They did the right thing—especially considering the positive results for American consumers since the adoption of the Restoring Internet Freedom Order,” Pai said in his statement, later adding: “In short, the FCC’s light-touch approach is working. In 2019, we’ll continue to pursue our forward-looking agenda to bring digital opportunity to all Americans.”

Pai’s statement was criticized by net neutrality advocates, some of whom predict that the FCC will be under more scrutiny from Congress now that Democrats have control of the House of Representatives.

“Dozens of anti-net neutrality members of Congress have already lost their jobs, and supporters of the open internet will soon chair the key committees that provide oversight for the FCC,” said Evan Greer, deputy director of internet rights group Fight for the Future, in a statement. “Ajit Pai won’t be laughing long when he has finally has to answer questions like why his agency lied to the media about a [distributed denial-of-service] attack that never happened.”