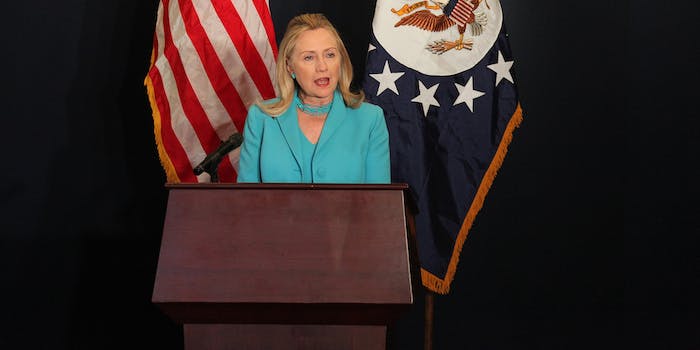 The next battle in the intensifying 2016 presidential campaign will take place this week in the most important net neutrality vote Washington, D.C., has seen in over a decade.

Quickly becoming a highly partisan Democrats vs. Republicans issue, several major 2016 contenders have forcefully carved out positions on one of the most divisive (if least understood) technology issues of the era while others have stayed noticeably silent.

On Thursday, the Federal Communications Commission (FCC) will vote on whether to reclassify broadband Internet connections as a public utility (like water or electricity), giving the agency the authority to regulate the speed and equity of Internet connections in order to allow equal and unfettered Net access, advocates say. Critics warn of government overreach, new taxes, and a slew of unintended consequences.

Hillary Clinton, the leading Democratic candidate according to virtually all polls, has spoken out in favor of net neutrality for nearly a decade.

“It is the embodiment of the fundamental democratic principles upon which our nation has thrived for hundreds of years.”

“I support net neutrality,” she said in 2006. “[The Internet] does not decide who can enter its marketplace, and it does not pick which views can be heard and which ones silenced. It is the embodiment of the fundamental democratic principles upon which our nation has thrived for hundreds of years.”

President Obama has pushed for net neutrality so forcefully that Republicans are investigating whether or not he wielded undue influence over the FCC, an independent government agency, in order to gain the result he seeks from Thursday’s vote. The White House has roundly denied these charges.

Silicon Valley widely backs the net neutrality reform that is expected to pass this week. Telecommunications giants, such as Verizon and AT&T, have fiercely opposed the new rules both in the public and legal spheres.

On the other side of the aisle, one Republican presidential contender has fiercely opposed the new regulations.

Sen. Ted Cruz (R-Texas) famously called net neutrality “Obamacare for the Internet,” adding that not only is the plan “beyond the scope of the FCC’s authority,” but that it “would threaten the jobs and investments made possible by the broadband industry.”

Sen. Rand Paul (R-Ky.), another big-time GOP hopeful, has come out against net neutrality as well.

“Yeah, I don’t want to see regulation of the Internet. I think it’s the wrong way to go about it,” Paul said late last year to the Huffington Post.

Paul’s opposition has deep roots, as far as the young senator is concerned. Right after taking office in 2011, Paul co-sponsored a bill to repeal net neutrality regulations and has repeatedly taken the same position ever since.

Both Cruz and Paul are currently trailing in most recent polls to Scott Walker and Jeb Bush, widely considered the two GOP front runners at this point in the race. However, both Walker and Bush have been conspicuously silent on the issue of net neutrality.

While he’s said next to nothing on this issue, Bush and Walker have aggressively courting Silicon Valley executives in hopes of earning major donations toward their already formidable campaign machines; Bush boasts the richest war chest in the GOP’s race by a significant margin so far.

The FCC’s Feb. 26 vote could have a clear and major impact on the future of the Internet, but the consequences for the 2016 race are harder to gauge.

A recent poll found that 74 percent of the public doesn’t know what net neutrality is, and only 33 percent favor it. By that measure, Republicans may be carving out a marginally winning position.

But the matter resonates deeply with big bank accounts of Silicon Valley and the politically active tech world in its orbit.

In that light, the Democrats’ forceful support and Republicans’ middling can be explained by the small but vastly influential group that care an enormous amount about this issue.

Big pieces of the 2016 puzzle are sitting squarely in California’s tech capital and the contenders seem poised to do whatever it takes to get it.