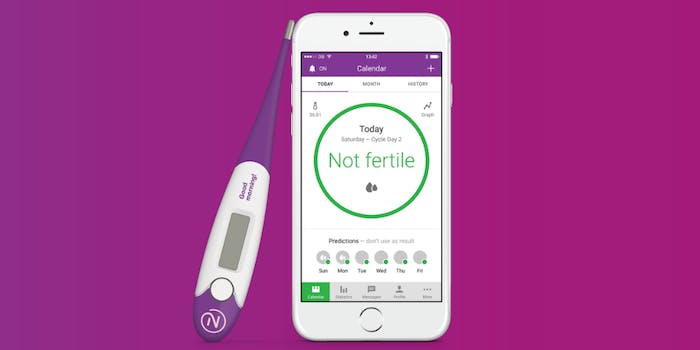 FDA approves a controversial app as a form of contraception

Would you use an app for birth control?

After getting the green light in Europe, the FDA has, for the first time, approved an app as an effective form of contraception. The Natural Cycles app uses an in-app algorithm and basal thermometer to predict when a user is fertile or not, and thus when it’s safe (or not safe) to have sex.

To use the Natural Cycles app, a female user measures her basal body temperature with the thermometer first thing each morning. The app tracks this information and can then identify when the user has ovulated—typically the basal body temperature rises by 0.4 to 1 degree Fahrenheit. When you’re not ovulating, the app gives you a green day. If you are ovulating, you’re shown a red indicator. It can take up to three months for the Natural Cycles app to learn the exact pattern of your cycle. The app costs $79.99 per year with Natural Cycles’ thermometer, or $9.99 per month if you want to use your own basal thermometer.

The app is 93 percent effective under typical use, according to its website—a stat that means 7 out of 100 users will get pregnant over the course of a year. For those who use the app perfectly (never having unprotected intercourse on what it calls “red days”), the app is 99 percent effective. This data comes from the experiences of 22,785 women and 224,563 menstrual cycles over a two-year time span. The company told BuzzFeed News it currently has 900,000 users across the globe.

According to the CDC, the IUD is one of the most effective forms of birth control with 99 percent effectiveness; hormonal birth control methods are next most effective; and condoms and “fertility-based awareness methods” are least effective against pregnancy. The Natural Cycles app would fall under the latter category.

The app has its pros and cons. It bills itself as “a natural method of contraception” on its website (perhaps because it doesn’t employ hormones), for those that are into that sort of thing. It can also help users learn more about their bodies. However, it’s not ideal for those with irregular periods, such as those with polycystic ovary syndrome. It also seems most effective when paired with a secondary form of birth control, particularly on days during or near ovulation. It’s also not ideal for those with irregular habits—if you don’t take your temperature at exactly the same time each morning, your results could be thrown off.

Lauren Streicher, a clinical obstetrics and gynecology professor at Northwestern University’s Feinberg School of Medicine, told Vox there are other potential issues with this app-based birth control method, as well.

“Sperm live longer than most people realize. Hearty sperm can hang out for 72 hours, while an egg can be viable anywhere from 48 to 72 hours,” Streicher told Vox. Natural Cycles says it takes this into account with its algorithm.

Ultimately, at a time when Roe v. Wade is under threat, using an app with such a high fail rate may not be a smart option for American women for whom pregnancy is not an option. (In January, one Swedish hospital reported that 37 women sought abortions for unwanted pregnancies after using the app.) However, if you’re in a stable, long-term relationship and comfortable with the idea of supporting a child if the app did fail, the Natural Cycles app could be for you.