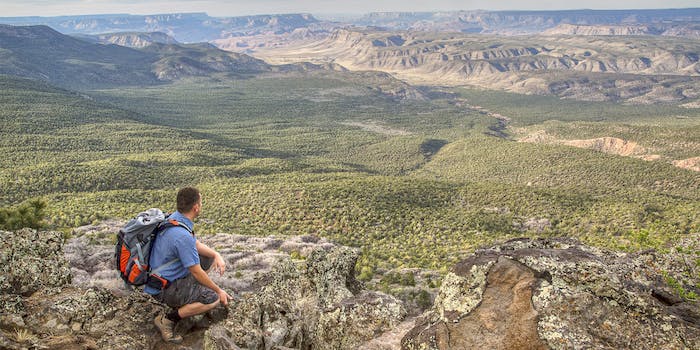 It's not just the average American family who stands to lose out on this plan.

America’s national parks have become a political battleground—and it’s the average person who stands to lose the most.

The Department of the Interior recently floated the idea of increasing entrance fees at some of the nation’s most popular national parks. Fees would double for motorcycles and visitors on foot or bike, while fees per vehicle would increase from $30 to $70.

The plan to hike the price of entry to national parks doesn’t just mean people will have to shell out more cash to enjoy America’s natural wonders—it risks making national parks the plaything for, and of, the rich by dissuading people from visiting the parks altogether.

These hikes will be in effect during peak season, or as the NPS defines it, the “busiest contiguous five-month period of visitation.” For example, in the desert climate of Joshua Tree National Park, price hikes will go into effect in January (the park is nearly uninhabitable in the summer), while increases at parks in northern climates like Olympic and Mt. Ranier will go into effect in May or June. This sort of increase frames what should be a public resource as something subject to capitalist demand. The New York Times compared the hikes to Uber’s surge pricing.

The increases impact the most popular parks during their busiest times of year. Iconic destinations like Yellowstone, Yosemite, Grand Canyon, and Rocky Mountain National Parks are among the 17 slated for an increase. Since the fees most deeply impact families, the biggest target here is the casual summer family vacation. While avid park goers, like myself, will retain their “America the Beautiful” pass that allows unlimited access to the parks for $80 a year, uninformed, casual, and first-time park guests will endure massive increases in cost.

This price increase is just the next salvo in a war being waged from within at the Department of the Interior. In his short tenure as head of the department, Secretary Ryan Zinke has proven that he is an enemy of public lands. Already, he has called for fewer restrictions on public lands, selling off land owned by the parks system and Bureau of Land Management, decrease the acreage of national monuments, and rolling back protections for wildlife, water, and climate.

As far as Zinke is concerned, national parks shouldn’t be a bountiful resource enjoyed by all Americans. To him and the Trump administration, public land should be limited in size and scope, and should be the playground of the wealthy. Many family vacations, especially in the West, involve visiting a number of national parks. A common trip for a family of four is a loop that includes Grand Canyon, Zion, Bryce Canyon, Sequoia, and Yosemite. Previously, a family of four would pay $150 in total entry fees for this trip. Under the new plan, that number would rise to $350.

This call for price increases comes as President Donald Trump’s proposed budget for 2018 trims the Interior Department by 12 percent, including $400 million in cuts to the parks. These cuts are being proposed while the national parks budget is 1/15 of 1 percent of the national budget. The reality is that with such a modest line item for such a vital national treasure, we should be able to subsidize national parks so that they are free for all citizens.

Due to underfunding, the parks already have a maintenance backlog that stands at $11 billion. This backlog could be wiped out with tax increase that would be almost imperceptible to most Americans. The National Parks Conservation Association estimates that the average citizen pays the cost of a cup of coffee in taxes to support national parks. If taxpayers were charged the cost of a single diner breakfast for one year, the maintenance backlog would be taken care of.

But that would be antithetical to want Zinke and company want. They want families to be priced out of the parks, choosing other vacation destinations. They want fewer citizens standing up for the rights of the parks while drilling and mining interests wait in the wings. As entry fees rise, poor and working-class families may choose to limit their trips, take a more affordable beach vacation, or going to a local amusement park. This will limit the access children across the country have to their parks, and will reduce the number of future conservationists and lovers of the outdoor who understand the parks as a national treasure and an American right. Higher entry fees will help to detach people from the idea that the parks are for everyone to enjoy, and, in turn, should be supported by everyone.

Zinke is creating a world where a generation can say, “Well, I don’t use the parks. Why should I pay for them?”

At the end of the day, for the Trump administration, this isn’t about cost; this is about perception. A vision of a hyper-capitalist oligarchy isn’t compatible with a thriving national parks system. The Trumps and the Zinkes of the world view protecting public lands as an obstacle to oil, fracking, and construction profits—nothing more.

These fee hikes aren’t about fixing the parks, they are about depriving future generations of the beauty of the Grand Canyon, the majesty of the Giant Sequoias, and the serenity of being totally alone in nature, just because it is inconvenient for the bottom line of a few.

Our goal should be to make America’s national parks free. Until then, the very least we can do is prevent price hikes that could place America’s greatest idea just out of reach of millions of our nation’s children.

From now until Dec. 22, there is a public comment period on the proposal to raise entrance fees to national parks. Visit the NPS Planning, Environment and Public Comment website to make your voice heard.