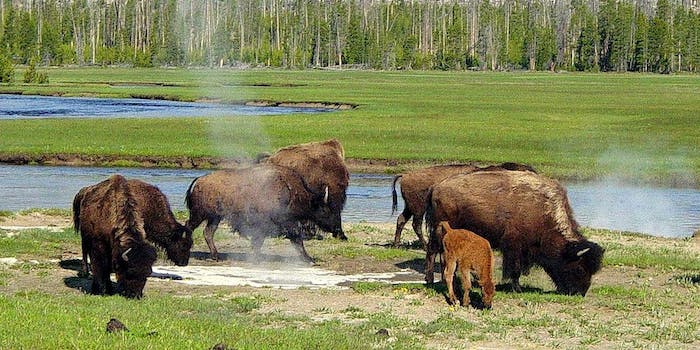 If a tree falls in the forest and no one can post a picture of it on Instagram, did it really happen?

Five Democratic lawmakers penned an open letter to the Obama administration Wednesday calling for funding to expand the deployment of Wi-Fi and broadband Internet service to all national parks.

“Since its founding, our National Park Service has set an example for the world to follow, and we believe that investing in 21st century telecommunications infrastructure is critical to maintaining that leadership,” reads the letter from Reps. Jared Huffman (D-Calif.), Raul Grijalva (D-Ariz.), Niki Tsongas (D-Mass.), Derek Kilmer (D-Wash.), and Jared Polis (D-Colo.).

“Improved connectivity will help to make our parks accessible and engaging to changing park visitor demographics,” the lawmakers wrote. “It will also support the Park Service’s long-term goals of improving public safety, providing greater interpretive services, and meeting the needs of the visiting public.”

The National Park Service has made a concerted push in recent years to expand Internet access to more parks. In 2013, the agency launched a pilot program expanding cellular coverage in five parks. A federal effort is currently underway to equip every visitor’s center in the national parks system with Wi-Fi by the end of 2016.

Not everyone is excited about the idea of bringing better Internet access to the parks. When the National Park Service considered partnering with CenturyLink to build a $34 million fiber-optic line through the Grand Teton and Yellowstone national parks, Jeff Ruch, the executive director of Public Employees for Environmental Responsibility, argued that the plan ran counter to the spirit of natural preservation that inspired the creation of the park system in the first place.

“The National Park Service will not find its institutional relevance on the Internet,” Ruch said. “Our national parks risk their unique role by striving to become just another consumer-driven entertainment provider.”

There is currently no free Wi-Fi available anywhere in Yellowstone, but approximately 50 percent of the park has cell service. The park’s website notes that most “tour guide” mobile apps for the area only require GPS, allowing them to work even in areas without any Internet access.

Telecom companies like Verizon have argued that expanded cell service in parks like Yellowstone would be beneficial from a safety standpoint by giving visitors the ability to call for help in an emergency.

The administrators of each the country’s national parks have the final decision about whether and how to upgrade their jurisdictions’ Internet connectivity.

In their letter, the Democratic lawmakers argued that broadband connectivity in national parks also had the potential to improve Internet access in rural areas. They pointed to President Obama’s recently unveiled plan to expand high-speed Internet access to rural regions currently underserved by commercial companies.

“I’m not suggesting—nor do I think it’s appropriate—that you have wireless connectivity on the Colorado River as you go down the Grand Canyon,” Jarvis said. “But if you’re on the south rim and you’re sitting on the deck of the El Tovar Hotel, then I think it’s perfectly appropriate that you might have wireless connectivity or at least be able to access your Facebook page and upload your photos.”

“When appropriately designed, improved telecommunication services at park units can have the ancillary benefit of improving connectivity in neighboring communities, as was recently the case in and around Death Valley,” the lawmakers wrote.

But as Politico noted, even if the letter convinces the White House to boost its funding request, the Republican-controlled Congress will decide how much money to allocate to the National Park Service and its Internet expansion plans.

Update 5:48pm CT, Jan. 28: This story has been updated to include comments from the National Park Service.