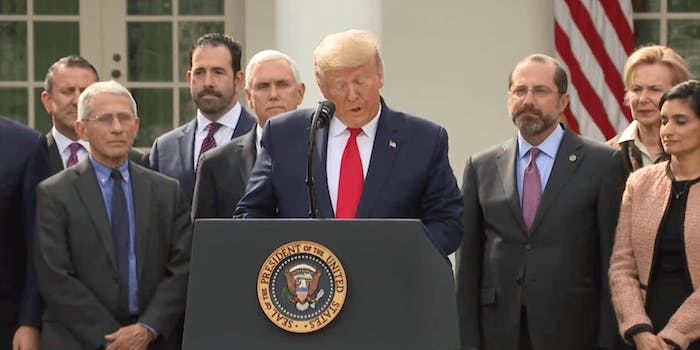 Most other countries have issued lockdowns to mitigate the virus

Under the federal guidelines, the coronavirus task force discourages Americans from travel, gathering in groups, or going to restaurants, bars, and nonessential businesses.

But it is up to the states to issue stay-at-home orders, which take a more aggressive stance on social distancing. Thirty-eight states issued stay-at-home orders recently, leaving 12 with partial or zero orders to stay home as of Thursday.

The federal extension of guidelines comes at the same time as Dr. Anthony Fauci, the nation’s leading virologist, predicts 100,000 to 240,000 coronavirus deaths in the U.S. even with current mitigation efforts. It has many medical experts wondering if the United States is doing enough.

As of Saturday, the the Center for Disease Control (CDC) issued a travel advisory on the New York tri-state area. They stated that the three states should “refrain from nonessential domestic travel for 14 days effective immediately.”

New York has been dubbed the epicenter of the virus in the U.S., with more than half of all cases.

What is a national lockdown?

The term lockdown has been loosely used to described varying circumstances from recommended stay-at-home to state-mandated quarantine.

But generally, countries labeled as under lockdown have halted international and domestic travel. In addition, citizens are only permitted to leave their homes to walk their pets or go to the grocery store and pharmacy.

In countries under lockdown, punishments of fines or imprisonment have been enforced in order to keep people in their homes, with a country’s military or police force enforcing lockdowns in order to ensure people are not violating the rules.

In Spain, residents face up to a 600,000 euro fine for violating lockdown rules. And you’ll be chased down by a policeman on horseback.

“We are in a critical phase in the fight against #Covid_19. And we won’t stop chasing the behavior of that irresponsible minority that puts the majority at risk,” the National Police tweeted along with a video of one officer on horseback chasing someone.

In the U.S., only Congress has the ability to prohibit interstate travel —no matter what Trump touts at his daily briefings. The CDC is only legally allowed to recommend travel advisories like the one encouraging New Yorkers to stay in their state.

“ICYMI: We continue to hear from many of you asking if certain rumors you’ve seen online about the National Guard are true. This message in particular keeps popping up. For the record: it is not true. Check the facts about this rumor and others here: ngpa.us/8605,” the National Guard tweeted.

Regardless, people are afraid. The New York Times reports that gun sales reached their second busiest day in history recently. They say it’s likely because people fear the pandemic may lead to civil unrest.

What is martial law?

As with any gubernatorial action, laws must be passed for a national lockdown to be constitutional in the U.S. Because right now, these federal guidelines don’t have any force behind them—they’re just recommendations. And the one law that has everyone’s attention is martial law.

It’s when the government deploys the military to enforce control over the population. Martial law is most commonly used during times of emergency like civil conflict or natural disaster.

While in place, the law suspends habeas corpus, which is the supervision power the judiciary has over lawful imprisonment.

Article 1, Section 9 of the Constitution states “the Privilege of the Writ of Habeas Corpus shall not be suspended, unless when in Cases of Rebellion or Invasion the public Safety may require it.” It’s so the military can take complete control without any hoops to jump through like the process of imprisonment through the court system.

The U.S. government has only implemented it when absolutely necessary. Notable uses of martial law in the U.S. include after the attack on Pearl Harbor and the Great Chicago Fire.

Franklin D. Roosevelt, president at the time, issued martial law in Hawaii due to fear that the large number of Japanese immigrants in the state would oppose the declaration of war. It lasted three years and was the longest duration of martial law.

While in Chicago, martial law was implemented during the fires of 1871. General Phillip Sheridan was put in charge of the city until the fires were extinguished.

Martial law is a necessary safety net. But, the idea of a military takeover keeps any freedom-loving American up at night. The fear likely sparked the rumors that the National Guard was mobilizing.

He later apologized for the typo.

“Please stop spreading stupid rumors about marshall law. COMPLETELY FALSE We will continue to see closings & restrictions on hours of non-essential businesses in certain cities & states. But that is NOT marshall law,” Rubio tweeted.

The National Guard and Rubio are ensuring Americans that martial law is not in the works. But, if the country were to issue a national lockdown then it would be necessary to use the military or police to enforce these rules.

According to the New York Times, that means 297 million people are being told to stay inside. While 38 states have issued statewide shelter-in-place, 12 states have partial or no stay-at-home orders. For example, Texas Gov. Greg Abbott leaves it up to mayors to decide if a stay-at-home order is necessary.

Exceptions to the rule include essential businesses like grocery stores or pharmacies. Also, people are allowed to go outside to exercise or walk their pets as long as they are maintaining the recommended six feet distance.

But it is not being strictly enforced. New York Gov. Andrew Cuomo closed playgrounds in New York City because people were not maintaining distance.

It’s happening in California. It was the first state to issue these social distancing rules 16 days ago, and it is seeing signs of a flatter curve in comparison to New York and Massachusetts, which lagged in stay-at-home orders.

What other countries have issued national lockdowns?

Countries with major coronavirus outbreaks that have issued national or partial lockdowns include China, South Korea, Singapore, India, Italy, Spain, and France amongst others.

But no two countries have the same lockdown rules.

China declared a lockdown on the Hubei province, which includes the city where the outbreak started, Wuhan, at the end of January. The government prohibited movement in and out of the province and moved infected people into isolation. It was enforced through a heightened military and surveillance presence.

The country is currently loosening some of the restrictions, which were on 60 million people, after a two month lockdown period.

Other impacted countries mimicked the lockdown in some form.

Jordan, for example, presented citizens with jail time if they left their homes for a four-day period. The government loosened its restrictions on March 25 as they couldn’t keep up with food delivery to households.

France extended its 15-day ban on public gatherings and walks outside. Residents are only allowed to leave for necessary provisions.

Similarly in Italy, all businesses were closed except grocery stores and pharmacies. If a citizen wants to travel for essential work or family reasons, they must receive police approval.

The graphic below demonstrates how the lockdown is working in Italy. The precent growth of the virus has decreased throughout March.

“IMPORTANT: Italy went into full, country-wide lock down on March 9. Powerfully explains why a national lockdown is essential. The US now at 176,500+ cases,” author Jim Harris tweeted. “Graph thanks to @ricpuglisi Assoc Prof at Università di Pavia.”

Will the U.S. issue a national lockdown?

It’s hard to predict what will happen during this unprecedented time.

But Cuomo gave the country a glimpse of what a response could look like in face of martial law.

Last week, Trump discussed the possibility of a tri-state area lockdown—New York, New Jersey, Connecticut. Before any clear plans were formalized, he met opposition from Cuomo.

Because states have power over their police force, each of the 50 governors would have to agree to implement a national lockdown in order for it to be enforceable.

But, states have proven reluctant to agree on a cohesive strategy to fight the virus.