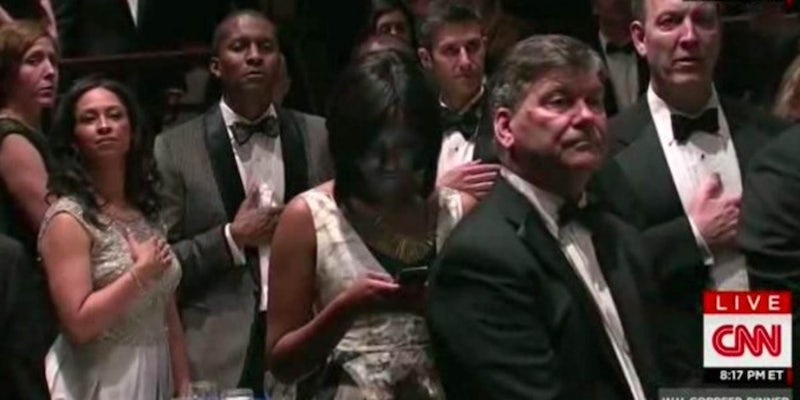 Conservatives bash reporter for using her phone during the National Anthem

She said she was taking notes.

Conservative media ignited in outrage this weekend when an attendee at the White House Correspondents’ Dinner was spotted texting during the national anthem.

The woman, Washington Post reporter Helena Andrews, said she was taking notes. That wasn’t a good enough excuse for critics who accused her of disrespect and a distinct lack of patriotism.

Apparently someone saw me on TV "texting" during the dinner. FTR I was taking notes. On my phone. Because it's 2015. #WHCD

The visceral controversy was covered almost exclusively covered in unabashedly conservative outlets, such as Tucker Carlson’s the Daily Caller, Fox News, and Glenn Beck’s The Blaze.

The headlines were bombastic, none more so than the The Daily Caller’s which claimed Andrews actions “outraged America.”

It certainly outraged this portion of America, some of whom viewed the phone use as a disrespectful attack on slain American troops.

At #whcd disgusting disrespect for flag and anthem pic.twitter.com/cjCOVFyXYu

In the comments, hundreds of angry readers used the event to question the patriotism of the Obama’s who were standing at attention for the anthem.