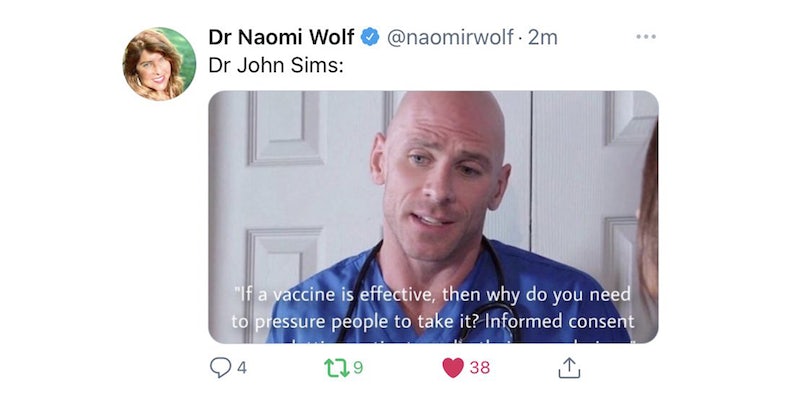 So much for vetting sources.

Prominent conspiracy theorist Naomi Wolf failed to thoroughly vet her sources before she appeared to tweet a fake anti-vax quote from a “doctor” who was actually adult film star Johnny Sins.

Wolf, an author and former political advisor to Bill Clinton and Al Gore, dedicates much of her Twitter feed these days to retweeting anti-vax and anti-mask propaganda. Last month, she told Tucker Carlson Tonight that President Joe Biden’s efforts to curb the spread of coronavirus are turning the United States into a “totalitarian state before our eyes.”

“Hello Dr. Wolf, huge fan of your work. Admire your outspokenness,” Klippenstein wrote. The quote, attributed to “Dr. John Sims, MD,” reads, “If a vaccine is effective, then why do you need to pressure people to take it? Informed consent means letting patients make their own choices.”

In a separate screenshot, Klippenstein showed that Wolf tweeted the photo and attributed it to “Dr John Sims.” The photo no longer appears on her Twitter account.

Klippenstein’s prank has been praised by comedian Kathy Griffin and New York magazine writer Yashar Ali, among others.

“Absolutely hilarious own and also a thorough bodying of whatever credibility anti-vaxxer Naomi Wolf has been able to convince people she has,” SH!TPOST podcast host Jared Holt tweeted.

Wolf established herself as a trailblazer of third-wave feminism with her 1990 debut book, The Beauty Myth, which explores how the media has pressured women to adhere to unrealistic beauty standards. But as New York Times book critic Paul Sehgal notes, The Beauty Myth “is well-known for exaggerating the number of women who died of anorexia (Wolf stated that anorexia kills 150,000 women annually; the actual figure at the time, in the mid-1990s, was said to be closer to 50 or 60).”

Wolf’s 2019 book, Outrages: Sex, Censorship and the Criminalization of Love, was also canceled in the U.S. after one of its central tenets was revealed to be based on a misunderstanding of the legal term “death recorded.”