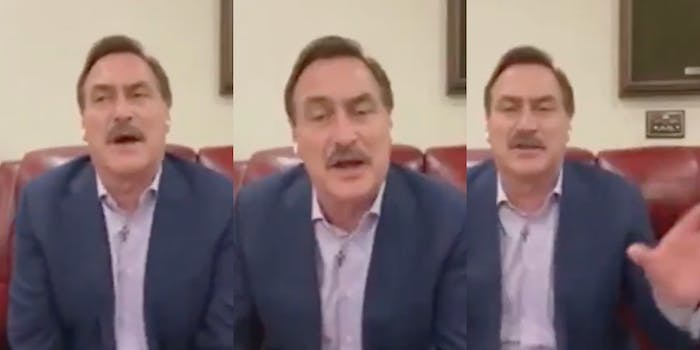 Video: My Pillow CEO has on-air meltdown after Bed, Bath & Beyond drops his product

My Pillow CEO Mike Lindell threw a nearly incoherent temper tantrum during a televised interview last night upon learning that several major retailers would no longer stock his products due to his support of the Capitol riot.

The disgraced pillow salesman was photographed outside the White House last week carrying notes that called on President Donald Trump to implement “martial law if necessary” and push for a military coup.

“They’re attacking not only my pillow, many other companies out there, but they’re attacking my vendors,” Lindell said of Sleeping Giants, which he called “the most evil people on the planet.” “I just got off the phone with Bed Bath & Beyond, they’re dropping my pillow. Just got off the phone not five minutes ago. Kohl’s, all these different places.”

“It’s not their fault that they’re scared, ‘cause they don’t realize these are fake people that are on there going, ‘We’re gonna boycott your store if you don’t drop My Pillow,’” he continued.

Lindell blamed the blacklisting of My Pillow on the efforts of “bots,” “trolls,” “communism,” and the “deep state.”

“If you’re a business owner out there, don’t believe in those little bots and trolls,” he said. “This is the evil left. This is the evil, crazy, left deep state or whatever it is. This isn’t a politician thing of Democrat, Republican. This is part of the thing attacking our country. This is the communism coming in basically. And they hired the best to attack us.”

“I have friends of mine that they’re getting, they’ve been gone after by the machine people,” Lindell alleged. “These Dominion and these SOS, SAS machines or whatever, they’re threatening to, or they did, I think, they’re going after—but you know what? That’s great. I welcome them to come after me because I’ve got all the evidence.”

With less than a day before President-elect Joe Biden is sworn into office, Lindell remained optimistic that the election would be proven fraudulent and outgoing President Donald Trump would retain his title. He claimed he talks to Trump lawyer Sidney Powell “at least twice a day,” and that “she is gonna keep fighting until everybody knows about this machine fraud and that other countries took this election from us.”

When Glenn suggested to Lindell that there’s a “2 to 3% chance Donald J. Trump remains in that White House past Wednesday,” Lindell emphatically agreed and suggested that the inauguration might be “null and void.”

“I want everyone out there to keep the prayers up and for our president,” Lindell said. “But I will say this: 100% the truth will be revealed. And when it is, we don’t know what happens then. So I don’t want everyone out there being so depressed that, OK, what if nothing gets done and this guy just, it—that inauguration then would be null and void. It’s not even real when it was done under suspicion that when this is revealed—and it will be, I give everyone my promise. It will be.”

Despite all evidence to the contrary, Lindell was resolute in his belief that either history or God would vindicate him.

“We didn’t come all this way, and God didn’t do all this, you know, fighting evil, to lose,” Lindell said.