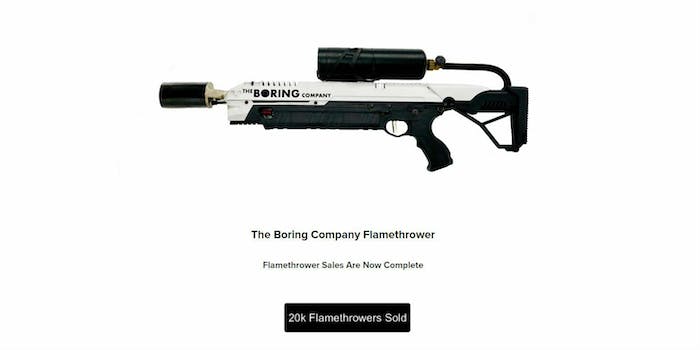 Elon Musk has officially sold out of Boring Company-branded flamethrowers

It took Elon Musk four days to turn a practical joke into a $10 million gag.

The business magnate sold out of his Boring Company-branded flamethrowers about 100 hours after putting them up for sale. Having sold 20,000 at $500, Musk raked in a handsome $10 million (minus expenses), money he could desperately use to help Tesla build more cars or continue his quest to create an underground high-speed transit system.

Musk posted his accomplishment on Twitter Wednesday night. He then generously threw in a free fire extinguisher, suggesting the “World’s safest flamethrower!” may not be safe after all. Or maybe nobody spent the extra $30 and he ended up with a warehouse of extinguishers that are too small to help with a failed Falcon Heavy launch. Additionally, Musk announced that each flamethrower will come with a serial number as if they were pieces of art.

All flamethrowers will ship with a complimentary boring fire extinguisher

Small detail, but each one will come with a serial number from 1 to 20,000 pic.twitter.com/ZBYEYO6zqu

If you didn’t purchase one, congratulations on not throwing your money away. Those of you kicking yourself for spending four days contemplating whether you needed one, don’t worry, there’s always eBay to fall back on. There are nearly two-dozen listings on the auction site selling the flamethrower for anywhere between $500 and $45,000.

If handing out roof torches strapped to airsoft guns to people who have no use for them seems like a bad idea to you, you’re not alone. California Assemblyman Miguel Santiago wants to block Musk from shipping the devices.

“This subject matter, in the wake of the state’s deadliest wildfires in history, is incredibly insensitive, dangerous, and most definitely not funny,” Santiago wrote in an email to the Washington Post. “Absolutely no public good could come from the sale of this tool.

Those are fair points, but establishing a ban on flamethrowers, the gruesome weapons first used in war 100 years ago, is more difficult than it sounds. Only two states have regulations against owning and operating a flamethrower: California and Maryland. But in California, where Musk’s ventures are located, the device has to spit flame a distance of 10 feet. The video above clearly shows that Musk’s toy doesn’t have that sort of range.

What the 20,000 buyers will do with these weapons, apart from, as Musk suggested, “roasting nuts” is a mystery. But if someone hurts themselves or, heaven forbid, hurts someone else, the cheerful CEO will have serious questions to answer.

Musk never seems to tire of these silly jokes. In fact, it looks he’s already thinking about the next one.

A snowthrower would be really fun