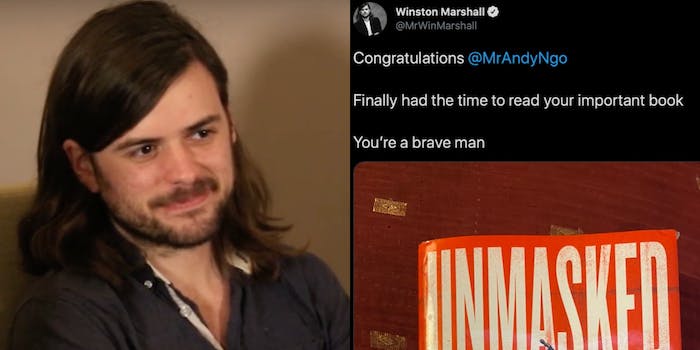 'Imagine if being in Mumford and Sons was only the second most embarrassing thing you've done.'

The right-wing activist released a new book called Unmasked, pledging to put readers “inside ANTIFA’s radical plan to destroy democracy.” Marshall posted a photo of Ngo’s book to Twitter on March 6. “Finally had the time to read your important book. You’re a brave man,” he tweeted, congratulating Ngo.

People online are now accusing Marshall of being a neo-Nazi and fascist, and very few are surprised by his support for Ngo. “Really didnt have ‘the banjo player from mumford and sons being a fascist’ on my radar but i guess we’re here now,” one said.

“Banjo player from Mumford and Sons being a fascist kinda makes sense tbh,” another added.

Some took the opportunity to mock the band. “Imagine if being in Mumford and Sons was only the second most embarrassing thing you’ve done,” one quipped.

Others pointed to the photo of the band with Jordan Peterson. “Nobody could’ve seen this mumford and sons thing coming,” Dan Hicks, a professor, sarcastically tweeted, including a screenshot of the photo.

Power also questioned whether the band was alienating some fans with the photo due to Peterson’s highly problematic comments regarding communities such as the LGBTQ+ community.

“I don’t think that having a photograph with someone means you agree with everything they say,” he said at the time.