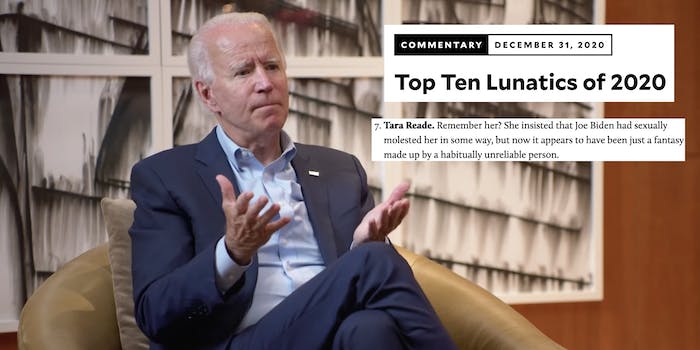 The popular left-wing magazine is being accused of political hypocrisy. Reade herself weighed in on the controversy.

Mother Jones is facing backlash online after one of its bloggers included Tara Reade, the woman who accused President-elect Joe Biden of sexual assault, in a commentary piece of the “top 10 lunatics of 2020.”

A former junior staffer in Biden’s Senate office, Reade made headlines in March of 2020 when she claimed to have been assaulted by the politician in 1993. The former vice president has vehemently denied the allegations.

The story had largely fallen out of the public eye until Thursday when political blogger Kevin Drum more or less accused Reade of fabricating the claim.

“Remember her? She insisted that Joe Biden had sexually molested her in some way, but now it appears to have been just a fantasy made up by a habitually unreliable person,” Drum wrote.

Reade’s inclusion on the list was immediately met with criticism online.

Many accused the popular magazine of hypocrisy, arguing that the left-wing outlet only came out against Reade because she had made claims about a prominent Democrat.

Some even went as far as to claim that Biden was responsible for killing the #MeToo movement, and others are taking aim at Mother Jones for harming it.

References were also made to previous articles from Drum in which he defended Christine Blasey Ford, the woman who accused Supreme Court Justice Brett Kavanaugh of attempted rape.

Reade herself weighed in on the controversy as well, taking aim at Drum for his remarks.

“This journalist chose to call me a lunatic and that my coming forward about Joe Biden was a ‘fantasy,'” Reader wrote. “Calling a survivor of sexual harassment and assault names is apparently the American norm.”

The list itself is also getting slammed by people online. “A list of lunatics is inherently pretty trash and ableist, but that certainly makes it a lot worse,” one user pointed out. Others are questioning why Mother Jones even green-lighted a “’top 10 lunatics of the year’ list to begin with.”

Despite the pushback, the article in question still remains online. Neither Drum, Mother Jones CEO Monika Bauerlein, or its editor-in-chief Clara Jeffery have publicly commented on the issue so far.