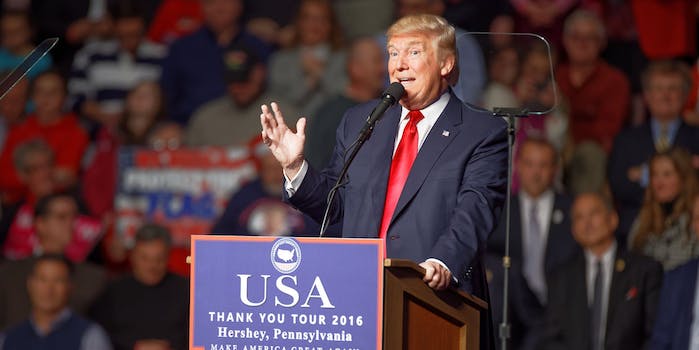 The most edited Wikipedia entries of 2016

The most edited topic of the year had nothing to do with Donald Trump or Hillary Clinton.

For better or worse (worse, definitely worse) 2016 is all but in the books. It’s also meticulously chronicled in Wikipedia, the world’s largest encyclopedia that now claims over 5.3 million English language articles at the end of its 15th year. Unsurprisingly, the year was marked on Wikipedia pretty much as we’re all sure to remember it IRL: a complete dumpster fire fueled by death, a contentious presidential election, and worldwide corruption. Also, Kanye West.

It comes as no shock that “Deaths in 2016” was the most edited article, with a total of 18,230 edits (as of Dec. 16). Pages listing deaths for the calendar year have topped Wikipedia’s annual most edited lists consistently since 2007. It was also an especially bleak year in notable deaths, claiming the lives of Muhammad Ali, David Bowie, and John Glenn, may they #RIP. 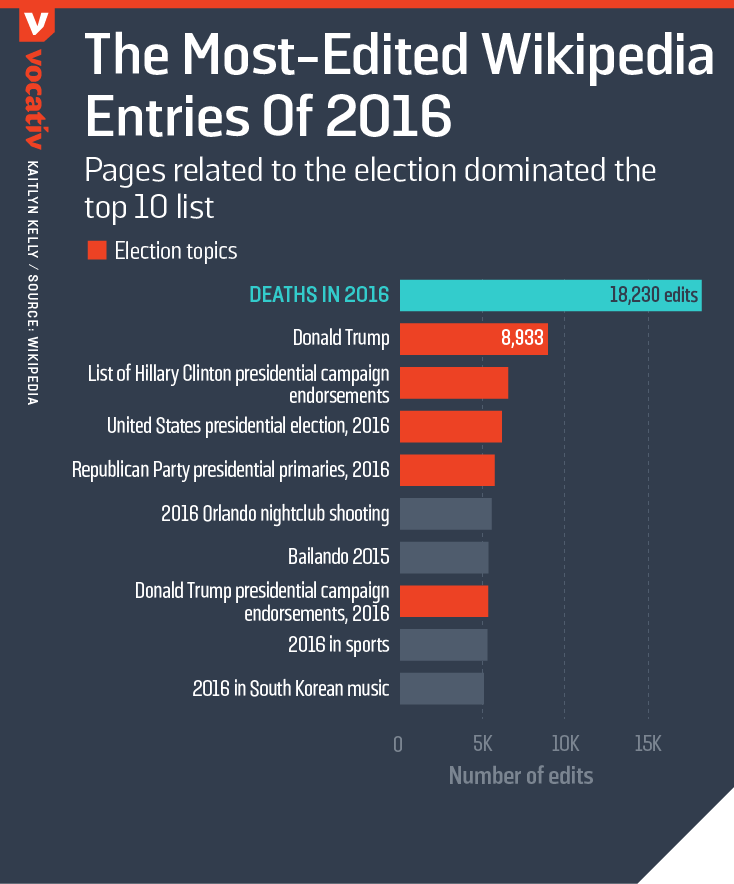 The second-most edited page was—surprise, surprise—Donald Trump, who now has a portal of his very own. His main page (which, fun fact, used to be the redirect page from www.loser.com) is now semi-protected so that only registered users (read: non-trolls) can make changes, unlike the majority of Wikipedia’s articles. This was first enforced on Nov. 9, the day he became the president-elect of the U.S., due to “persistent vandalism.” It’s interesting to note, however, that Wikipedia editors monitoring his page observed other instances of heavy vandalism as early as 2006.

Trump’s page is immediately followed on the most edited list by the page for Hillary Clinton’s endorsements, which (now disambiguated) boasts over 750 notable politicians as well as well-known members of the public. Given that Clinton’s years of political experience and positions had been well-catalogued in the years prior to the election, her biographical Wikipedia page, which is also semi-protected, saw very little change this past year.

Overall, it was a huge year for politics on the English language Wikipedia, where the presidential election was chronicled in painstaking detail to a degree that it was at times more predictive than the news cycle: back in July, edits to the pages of expected VP picks by the Clinton campaign foretold the announcement that Tim Kaine would be selected. Months before that, Wikipedia editors waged war against one another, collectively unsure of whether or not to call Clinton the “presumptive nominee” for the Democratic party.

In addition to the fact that 35 percent of Wikipedia’s top 20 most edited articles were politics-related, month-to-month counts showed similar trends. In October, newspaper endorsements of the presidential candidates was the most edited page, followed by a page specifically devoted to cataloging Trump’s sexual misconduct allegations (which editors once quibbled over renaming “Donald Trump sexual assault allegations”).

Rounding out the top 20 most edited pages of the year were other major events like the reporting on the Panama Papers, weather-related occurrences along the Atlantic and Pacific, and the Orlando nightclub shooting. (Also, “The Life of Pablo,” released by Kanye West in February, and “Batan v. Superman.”)

As for the dark-horse contenders that somehow blew past the more widely researched topics of the year, congrats to the editors who have helped catalogue: the most recent version of the Argentinian dance competition “Bailando” (which seems to have been mostly input by two or three major fans); the 26-book mystery series published in the thirties, forties, and fifties chronicling the life of fictional heroine Beverly Gray; the year in South Korean music (heavily represented by “K-pop”), and the life of Vincent Van Gogh.