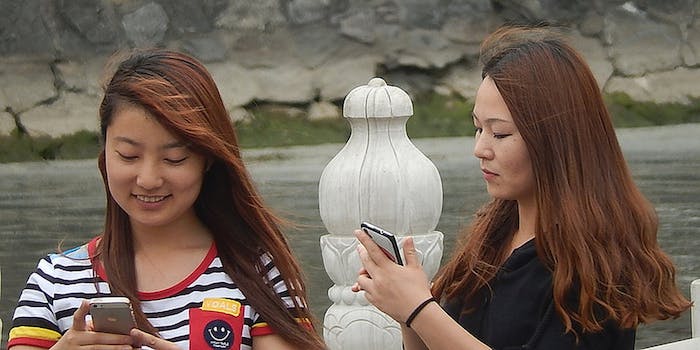 Just a little something to make your hour (or three) of morning emails a little less terrible.

Email is the tedium that plagues our lives, and mornings can be consumed by the stuff. But what if all the spam and Viagra ads you spend the early hours sifting through were replaced by a beautiful memory instead?

Entrepreneur Brenden Mulligan created MorningPics, an email service that sends subscribers a previous photo they’ve posted to their Instagram accounts. The email comes every morning, roughly around 7am. “The idea is that you’ll wake up and at the very beginning of the day you’ll get this,” Mulligan, 33, told the Daily Dot. “It’s a nice kind of way to start your day.”

The idea for MorningPics came to Mulligan in 2011 after a trip to Machu Picchu in Peru. Standing at atop a mountain, he snapped a photo as a fog rolled over the centuries-old Inca village below him.

Mulligan, who says he doesn’t spend time on his own digging through old photos, wanted to find a way in which these images could somehow just come back to him, without effort on his part. Describing it as a “weekend project,” he wrote the code for MorningPics over the course of a few days and released it to his friends.

“It’s such a simple product… and it does exactly what it says it does,” Mulligan says. “It just emails you a random photo every day.”

Six days a week, MorningPics sends a previous photo from an Instagram feed. On Sundays, subscribers receive the Sunday Edition, a round-up of photos posted to Instagram within the past week.

MorningPics’ subject line tells a subscriber how long ago a photo was taken and where, if a location was tagged. Mulligan describes reading the subject line as a mental guessing game to try and remember what happened however many days ago before opening the email. Once opened, a subscriber will see a photo they’ve posted, as well as the number of likes it got and any comments it received.

In addition, Mulligan modified MorningPics to include two stipulations: A photo that shows up in one’s inbox must have been taken at least 60 days ago, and a new user must have posted at least 30 photos before signing up for the service. “It’s a different feeling when you get a photo you took last weekend and when you get a photo you took a year ago,” Mulligan explains. And to Mulligan’s surprise, some people have signed up for MorningPics without having ever posted a photo to Instagram, a factor he hadn’t initially taken into account.

MorningPics became a social experiment to see if Mulligan could find a type of email that people would actually want to open. After the initial sign-up process, no further action is required from a subscriber. All you need is a sense of nostalgia. Yes, the app is very similar to Timehop, but presentation and being Instagram-specific manage to set it apart in a subtle way.

Mulligan relies on word of mouth to garner subscribers which, and the app is now reaching tens of thousands of people, though he cannot disclose the exact amount.

In May, Mulligan updated the design to improve its compatibility with mobile devices and open the possibility of making MorningPics to a native app. But Mulligan’s main project is group photo-sharing app Cluster, where he’s the cofounder. He also designed a program that allowed Instagram users to access their photos online, before users were given their own websites.

All of these projects tie back to the same technologies and ideologies. “I feel like the magic of the iPhone and Android—the magic of having a real camera on your phone—is that you can do something with it,” he says. “It’s really powerful compared to six years ago or 10 years ago when you’d go and get photos developed and sharing it meant getting doubles and handing them to people.”

Mulligan ultimately aims to find ways, like MorningPics, to take the meaningful moments people make and put it back in front of them and their friends with “small, simple apps intended to make people smile.”