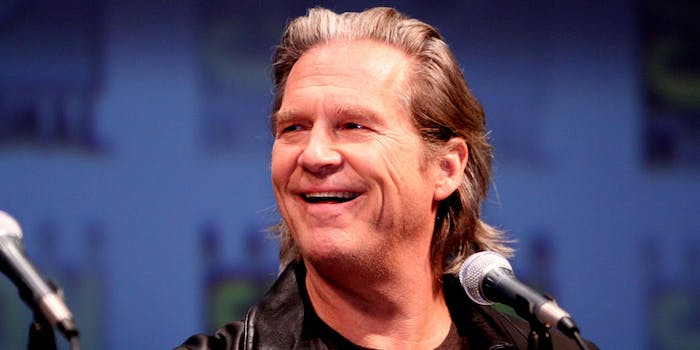 The Dude does not abide.

Just days after Montana’s U.S. senator dropped his re-election bid over a plagiarism scandal, residents of Big Sky Country are turning to Facebook and the Internet to draft an unlikely replacement: The Dude.

That’s right, as of Tuesday morning, more than 3,600 people had joined a Facebook page trying to convince actor and Montana resident Jeff Bridges to run for U.S. Senate.

Last week, U.S. Sen. John Walsh, a Democrat, announced he was dropping out of the race after the New York Times reported that he had plagiarized significant parts of a thesis paper while at the U.S. Army War College in 2007. Walsh, who was appointed to the position earlier this year after longtime Sen. Max Baucus became the ambassador to China, was running against Republican Congressman Steve Daines, who many believe had the upper hand even before the Democrat decided to end his bid.

Now, with just months until the election, Montana Democrats are scrambling to find a replacement before Aug. 20, when state law demands they have a new candidate.

One Billings woman believes that Bridges, who owns property in Park County, would be the perfect stand in for Walsh. Lizbeth Pratt created the Facebook page and a Change.org petition to encourage him to run. As of Monday night, the petition had more than 1,000 signatures.

“Jeff is a great person. He has loved Montana and all it represents since he first set up residence in Park County four decades ago,” Pratt wrote. “He has great name recognition! Charisma! Brains! He’s internationally renowned, but he is also highly accessible. We need The Dude to be Montana’s next U.S. senator!”

Surprisingly, it didn’t take long for Bridges to respond to the petition and Facebook group and he briefly talked about it on the Howard Stern Show Monday where, according to Last Best News, he quickly doused the idea that he would run. Bridges apparently told his wife about the campaign, and she told him “don’t even think about it.”

While that would have ended most people’s dreams about having The Dude become their next U.S. Senator, Pratt told Last Best News she was still hopeful: “Every candidate’s spouse initially says no.”

If Bridges or his wife do change their minds, they have to do it before Saturday, when Montana Democrats gather to hold a nominating convention.

Photo via Gage Skidmore/Flickr (CC By 2.0)