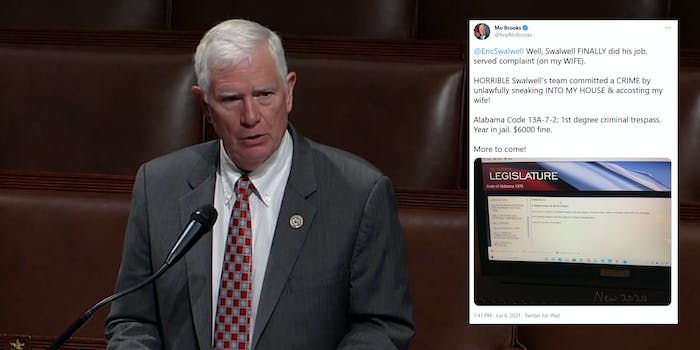 Rep. Mo Brooks (R-Ala.) appears to have inadvertently shared his Gmail password with people online while raging against a fellow member of Congress.

Brooks tweeted out a photo of his monitor on Sunday afternoon showing a webpage for the code for criminal trespassing in Alabama.

The tweet from the Republican lawmaker was directed at Rep. Eric Swalwell (D-Calif.), who named Brooks in a lawsuit related to the Capitol riot in January. Brooks tweeted on Sunday that he had been served by Swalwell’s “team” and claimed that they committed a “crime” by “unlawfully sneaking into my house.”

However, the Republican lawmaker seemingly failed to notice that the photo also included the bottom of his monitor—where he had what appears to be passwords written down and taped to the bottom of the screen.

The apparent passwords were for “Gmail” and a “Pin.”

The tweet still remains up as of Monday morning, despite Brooks seemingly recognizing he made a mistake.

In the tweet that showed his passwords, Brooks did not add a period in front of Swalwell’s Twitter handle, making it appear like a reply. Around two hours after sending that original tweet, Brooks wrote a new tweet that said the the exact same thing, just adding a period before Swalwell’s handle.

The new tweet included a new picture of his monitor showing the code for criminal trespass in Alabama, but he cropped out the bottom of his monitor where the taped passwords were.

“Not only does this sitting Congressman have his PIN and Gmail password stuck to his laptop, he’s not even removed the tweet some 15 hours later,” one Twitter user wrote on Monday morning.

“Kids, don’t set your password and pin to your wife’s and your initials and birth years. That is not even close to secure. Also, don’t do this,” another person wrote.

“Nothing like writing your passwords down like a moron and tweeting them to the world,” another person chimed in.