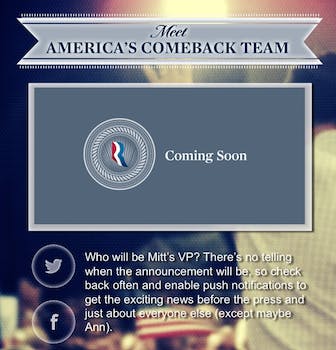 The vice presidential candidate could be announced any minute.

The announcement of Mitt Romney’s vice presidential pick will come any day now, maybe at any moment. Heck, maybe right now, so quickly check the Mitt’s VP app on your smartphone!

That’s what Romney’s campaign wants you to do, and this week it was reminding users to be sure to have the push notifications activated for the app.

“You already downloaded the Mitt’s VP app — thank you! America’s Comeback Team could be announced any day now. But I just wanted to remind you that you still need to do one more thing in order to be the first to find out who Mitt has selected as his running mate,” wrote the campaign’s digital director Zac Moffatt on Tuesday.

Romney’s campaign had also purchased promoted tweets on Tuesday which popped up whenever someone searched for the likes of Tim Pawlenty, Paul Ryan, and Chris Christie, all in an effort to boost excitement about the vice presidential pick. It’s dragging out the hype, which is just what the campaign wants to do.

But even if the app hasn’t met its primary obligation—to tell you the VP choice before anyone, even the press! (which is absurd, because let’s be honest, only reporters have probably downloaded it)—it is working hard for Romney’s campaign.

As The Atlantic pointed out, the only way for the app to work is for the user to sign in via Facebook or an account on Romney’s website. In other words, it forces you to give the campaign information about where you live and how to contact you. This helps Romney try and catch up with his competitor, Barack Obama, who has been taking names and numbers for a lot longer. The app also gives you a way to donate to the campaign. There is also a section of the app that connects with Twitter where you can retweet various Romney tweets or slogans and spread the candidate’s message.

Of course, Romney should be careful not to make the same mistakes Obama made in 2008, when his campaign informed people of his choice of Joe Biden via text message at 3am.

Because I’m going to be some ticked if I get woken up at 3am by some darn push notification.