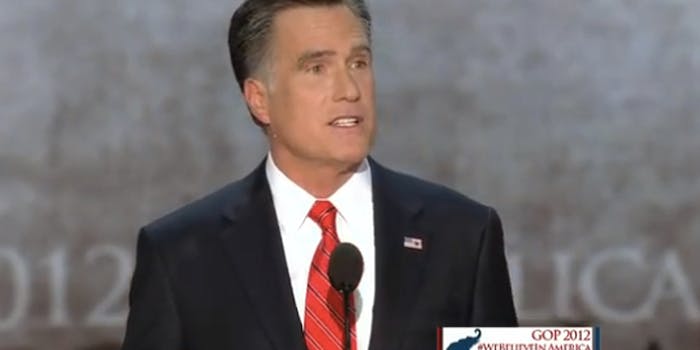 Mitt Romney had a huge day on Twitter, but Obama got more new followers.

The Republican National Convention erupted in celebration Thursday night, as Mitt Romney formally accepted his party’s nomination, but Twitter had been active all day with political commentary. According to 140elect.com‘s Zach Green, there were more than 538,000 tweets about the Republican convention Thursday. And that was before Romney even took the stage.

Part of the traffic boost was an unprecedented move by the Romney campaign to purchase two promoted trends – #BelieveInAmerica and #RomneyRyan2012 – on Twitter, according to Clickz.com. Although promoted tweets are a standard move in presidential politics (even Herman Cain did it during his brush with a sex scandal last year), buying a promoted trend is a new and expensive move, reportedly costing $120,000 a day.

Before Romney took the stage, Clint Eastwood spoke to the crowd, and his appearance caused a spike in mentions online. Some people were curious about the star’s mental condition, as Eastwood pretended to interview President Barack Obama in an empty chair in perhaps the most awkward moment in political convention history.

“Clint, my hero, is coming across as sad and pathetic. He didn’t need to do this to himself. It’s unworthy of him,” wrote iconic movie critic Roger Ebert.

It didn’t take long for spoof accounts to crop up from the bizarre moment. Clint’s Empty Chair (@ClintsChair) and Invisible Obama (@InvisibleObama) were just two of the more notable accounts.

“When Mitt Romney says ‘Mr. Chairman’, do you think he’s referring to me?” wrote Invisible Obama.

Amazingly, within just minutes, @InvisibleObama had more than 15,000 followers.

But the real star of the night was Romney, who came on stage shortly after 10:30pm. During Romney’s speech, mentions of the candidate and the RNC skyrocketed. According to Topsy.com, there were nearly 20,000 mentions of the former governor just before the evening speeches kicked off. During the speech, mentions of Romney hit nearly 100,000. Reporters and politicos were commenting on the speech and responding to it as it happened, as were officials from the Obama campaign.

“Romney reminiscing about the greatness of the American auto industry, but if he had his way we would have let Detroit go bankrupt,” wrote deputy campaign manager Stephanie Cutter.

Of course some tweets were in support of the Republican, including one from Rep. Eric Cantor: “.@MittRomney and @PaulRyanVP are uniquely qualified to handle the challenges facing our nation at this critical time.#BelieveInAmerica #r4.”