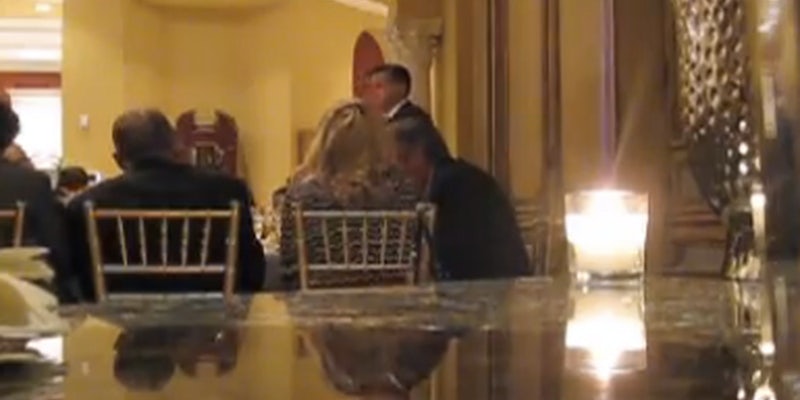 Mother Jones released the entire 49-minute video of Mitt Romney at a private fundraiser, in which he criticizes President Obama and the reported 47 percent of Americans who do not pay income tax.

The damage to Mitt Romney by leaked footage from a private campaign event has already been done. Excerpts from the presidential hopeful’s speech were plastered all over the Web Monday, and President Barack Obama has already responded with a video on YouTube.

The video was released at 2:30pm ET, after the news magazine teased the world with clips of Romney criticizing the Palestinians and insulting the reported 47 percent of Americans who do not pay income tax.

In it, Romney speaks off the cuff on topics like foreign policy to donors who paid $50,000 a plate. The video appears to have been shot from a server’s table

“For me, it’s all about strength,” Romney said. “Speaking softfully but carrying a very, very, very, big stick. This president instead speaks loudly and carries a tiny stick and that’s not the right course for a foreign policy.”

Following a comment claiming that Palestinians have “no interest whatsoever in establishing peace,” Romney contended that American intervention was the only way to settle things in the Middle East.

“The idea of pushing on the Israelis to give something up, to get the Palestinians to act, is the worst idea in the world,” he said. “We have done that time and time and time again. It does not work. The only answer is show strength. American strength, American resolve.”

In the second half of the video, Romney promised to jumpstart the economy if he wins the election. However, he said if Obama were to win, he couldn’t predict “what’ll happen.”

“I can never predict what the markets will do,” he said. “Sometimes it does the exact opposite of what I’m expecting.”

Romney also discussed why he denied an appearance on Saturday Night Live, despite the fact that he has appeared on The View.

“[Y]ou wanna show your fun and a good person, but you also want to be presidential,” he added. “Saturday Night Live has the potential of looking slapstick and not presidential.”

Obama’s campaign has released a video in response to the initial Romney clips. It features everyday Americans responding to the former Massachusetts governor.

“I actually felt sick to my stomach,” one woman says in the video.

“It shows that he is out of touch,” adds another.