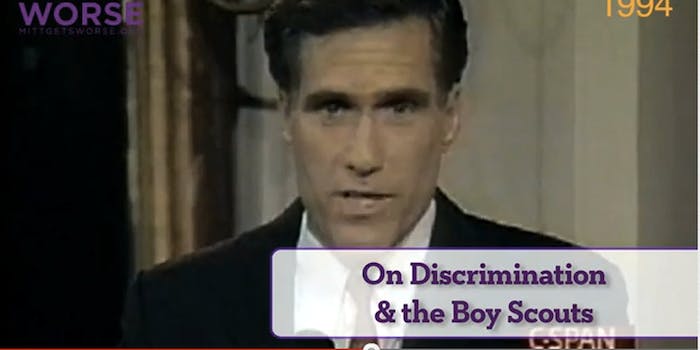 This website shows Mitt Romney just can't seem to keep a straight story when it comes to LGBT rights.

During a week in which its seems Mitt Romney has been attacked from every angle, the Republican presidential nominee is taking fire from another group, one that has picked YouTube and the Internet as their battleground.

MittGetsWorse.org is a play on the It Gets Better Project and attacks Romney on his stance on gay marriage and LGBT rights. According to the site, in 1994, when Romney ran against the late Ted Kennedy for U.S. Senate, he said he was a friend of the LGBT movement, but that position has clearly changed in the years since. Backed by American Bridge 21st Century and Courage Campaign Super PAC, the site seeks oral histories about Romney’s past positions.

The website essentially serves as a gateway to a series of YouTube videos of people talking about their experiences with Romney. The video series kicks off with a clip from Julie Goodridge, who met with Romney when he was governor of Massachusetts. During the meeting, she said that Romney was uninterested in her cause and at one point said, “I don’t care.”

She wraps up the video with: “I have never felt more strongly that this man cannot be the next president of the United States. Because let me tell you, it gets worse and Mitt is going to make it worse.”

Yet while stories like the one Goodridge’s are effective, they may not be the biggest bombshells the website has. The backers of the site have gone back into the archives, as far back as 1994, and found clips of Romney stating where he stands on various issues. Two that could be particularly damaging are Romney’s stance on discrimination in the Boy Scouts and his changing attitude on “Don’t Ask, Don’t Tell.” Both clips reflect Romney’s ability to “flip-flop,” specifically the clip about the Boy Scouts, where it seems Romney changes his stance halfway through the answer.

As with most political groups, MittGetsWorse.org has a social media presence as well and so far seems to be attracting a steady following in the day since it launched—as of Thursday night about 1,000 people liked it on Facebook.