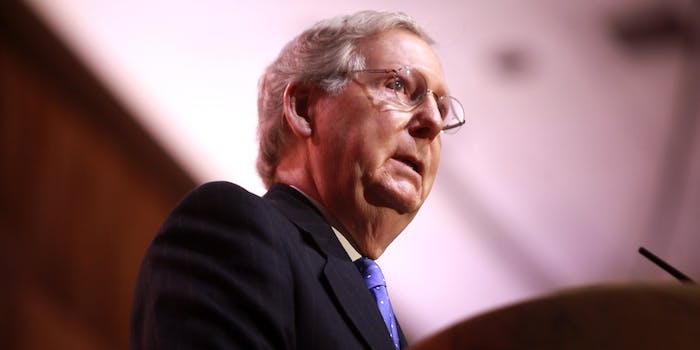 'What IS going on with Mitch’s health?'

The pictures, which have been shared widely across Twitter, show McConnell with bandages on both of his purple-colored hands.

Many Twitter users reacted with shock and horror at the badly-damaged appendages.

“This *is* odd,” @stevesilberman wrote. “What the heck is going on with Mitch McConnell’s hands?”

Multiple users joked that McConnell may have held a “Horcrux,” an object from the Harry Potter series formed by dark magic.

So what exactly is going on? Neither McConnell nor any of his representatives have publicly commented on the matter at this time.

People began claiming that the images were proof that McConnell had everything, from the coronavirus to other serious ailments. Numerous people argued that the senator was undoubtedly taking blood thinners.

“Those skin lesions appear to be related to some vascular issue/disease,” @AEscaninha said. “He’s probably on blood thinners. That skin is very common in patients who are on dialysis.”

The 78-year-old’s hands, which could have simply been bruised by an injury as is often the case with the elderly, remain a mystery for now.