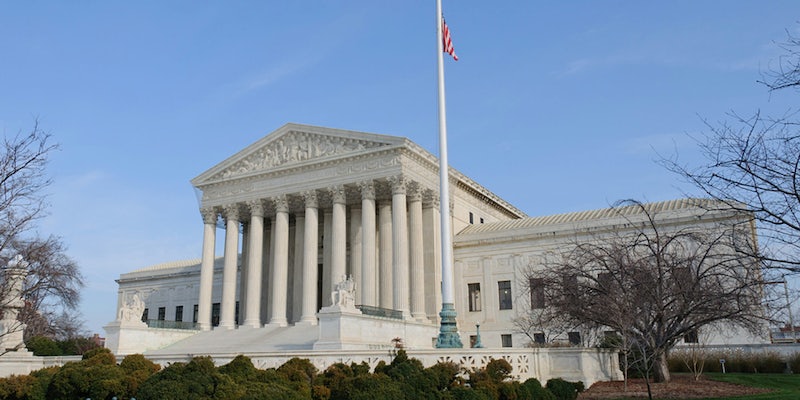 Clothes are on the docket.

Imagine getting thrown out of the voting booth because you’re wearing a Black Lives Matter T-shirt. What if you weren’t allowed to wear a Planned Parenthood shirt to a polling place?

Or what would you do if wearing t-shirt from your alma mater meant you weren’t allowed to vote? This may sound like a dystopian idea, but in a number of states in America, this is already the law. There are statutes on the books in a number of states that prohibit clothing that expresses political views in polling places, and groups from both the left and the right are coming together to try to fight against them.

In Minnesota (and ten other states), it is illegal to enter the voting booth wearing T-shirts, hats, or buttons that express political views. State officials have said that the goal of this law is to create “an orderly and controlled environment without confusion, interference or distraction.” Unfortunately, Minnesota’s law, and others like it, doesn’t then define “political.” This has groups from both sides of the aisle worried that a law about decorum might lead to disenfranchisement.

The history of this case begins back in 2010. During that year’s election cycle, members of the Alliance showed up at polling places wearing clothing featuring logos of Minnesota’s Tea Party and buttons the read, “Please I.D. Me.” In keeping with the Minnesota law, members of the group were asked to remove their political paraphernalia and turn their shirts inside out. They declined, but were still allowed to vote. However, they now had the grounds to challenge the law.

Several lower courts ruled against the MVA, and stated that the buttons in particular were problematic because they were, “part of an orchestrated effort to falsely intimate to voters in line at the polls that photo identification is required in order to vote in Minnesota.”

Charles Rothfeld of SCOTUSBlog, which covers the Supreme Court, recently outlined the contours of the government’s argument in a detailed post.

“If shirts like this are allowed, voters entering the polling place might mistakenly believe that the people wearing them are poll workers and that voters are required to have an ID to vote in Minnesota; poll workers themselves might become confused about the state law’s requirements; voters without an ID might leave without casting a vote; and, in any event, cascading delays while the matter is straightened out could bog down the vote, as poll workers who notice the problem are diverted from their other duties to explain that an ID is not needed to vote in Minnesota.”

Supreme Court experts look to Burson V. Freeman as a key precedent in this case. Though the case doesn’t affect dress codes, it does set a tone for political decorum in polling places. The 1992 case established a 100-foot buffer zone around polling places that bans explicit campaign materials, such as signs, within the designated area. Many more states have a law like this one the books than have a statute similar to Minnesota’s. But both types of laws come from a similar perspective. In earlier eras, polling places had a more animated atmosphere that sometimes turned violent, resulting in politically motivated brawls. The Court referenced this when ruling on the case, and pointed out that politicized environments have served to “keep away elderly and timid voters of the opposition” away from the polls.

History also offers some solid arguments in the other direction. Political intimidation has been used in variety of ways to keep Black voters away from the polls in the South, from Reconstruction through to present day. With states attempting to pass Voter ID laws and attempting to restrict the voting rights of ex-convicts, we’ve seen that seemingly innocuous voting laws can be used to deny people their rights. It doesn’t seem like too much of a stretch to think laws like this could be used to target minority communities.

However, this case presents an interesting quandary for liberals, and may not be so easily viewed through a partisan lens. it is possible to imagine states known for voter suppression using laws like these to further restrict voting rights of minorities or in college towns. Already, the Minnesota law has been interpreted to include groups like the MoveOn, and when the case was argued before the 8th Circuit, labor unions and chambers of commerce were used as examples of clothing that could be prohibited as well. Legal analysts have expressed concern that the lack of specifics in the statute could lead to bans on clothing that expresses support for social movements “Black Lives Matter” or “MeToo.”

The Minnesota ACLU recognized this strange situation in a statement on the case, writing, “While the ACLU routinely opposes voter suppression laws like voter ID, that doesn’t mean someone should be turned away from the polls for wearing a button with that political message.”

This is a difficult question for the Supreme Court, and Americans at large. On one hand, something like a “Please I.D. Me” button could have an effect adjacent to hate speech, intimidating potential voters. On the other hand, it isn’t much of a stretch to imagine this precedent itself being used as an instrument of voter suppression. Some hope that the Supreme Court will keep a version of these laws in place, but perhaps require a more narrow interpretation. The ACLU’s position is that “anti-electioneering laws should only prohibit voters from engaging in speech or expression in support of a candidate or issue on the current ballot.”

Even this seemingly simple standard can quickly become fraught, as was evidenced when a woman was barred from a polling place in 2012 for wearing an “M.I.T.” shirt that a poll watcher thought was meant to support Mitt Romney. This begs the question: is there a way to interpret such a law that would be fair and just?

It remains to be seen where the Supreme Court will come down on the case. With arguments scheduled for late February. This means that the case should be resolved in time for the midterm elections, and depending on where SCOTUS lands, an already contentious midterm could lead to a polling place environment worth watching on Election Day.