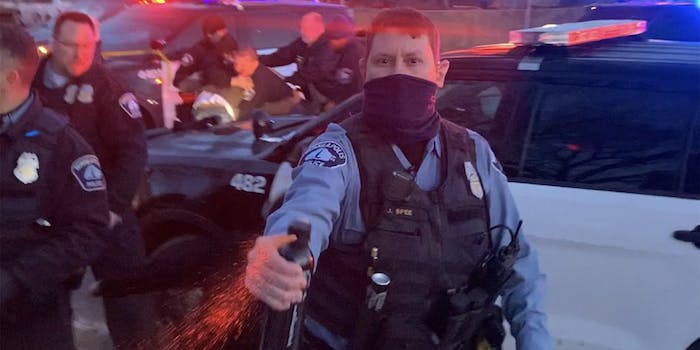 Minneapolis police are back in the news over allegations of brutality against civilians as they attempted to clear a homeless camp.

A video of the clash shows a chaotic melee and officers using pepper spray on the crowd.

The COVID-19 pandemic has worsened the plight of people experiencing homelessness. Homeless camps have grown and sprung up in many cities nationwide, which are grappling with the situation. (Advocates say the body of evidence is clear: Housing is the only proven solution for homelessness.)

Minneapolis is among those that have opted to evict people from camps, however. Police were attempting to clear one such camp when violence broke out on Thursday morning.

The Star-Tribune reports that the Minneapolis Police Department (MPD) says that in the course of evicting the camp, where roughly 20 reside, officers were “actively challenged” by a group of 25-30 people, who threw snowballs at them and pushed against their line. Police claim those defending the camp initiated the violence and says that five officers sustained minor injuries and five people were arrested.

One volunteer told the Star-Tribune that they saw at least one officer escalate the situation by charging at the crowd, only stopping at the last minute.

A video of the incident shows cops hitting and trying to pull someone off one of their brethren. At the end of the 30-second video, an officer appears to put their knee into the back of someone’s neck.

Last spring, George Floyd died after a Minneapolis police officer kept his knee on the back of Floyd’s neck for nearly nine minutes. That officer, Derek Chauvin, is charged with murder. Chauvin has pleaded not guilty.

Local officials promised reform in the wake of Floyd’s death, which inspired prolonged national protests of police brutality against Black people. On Thursday, USA Today reported that promised changes largely have yet to materialize.

Twitter user @MNUprising was first to post the video of officers clearing the camp, which reportedly largely housed Black and brown men. The video has nearly 150,000 views as of this writing. MNUprising claims that police are “on a rampage in Minneapolis.”

One person commented that the video was proof that MPD “[has] not changed, cannot change, and will not change.”

Police ultimately retreated without clearing the camp. Residents there are demanding no further use of force to displace them.