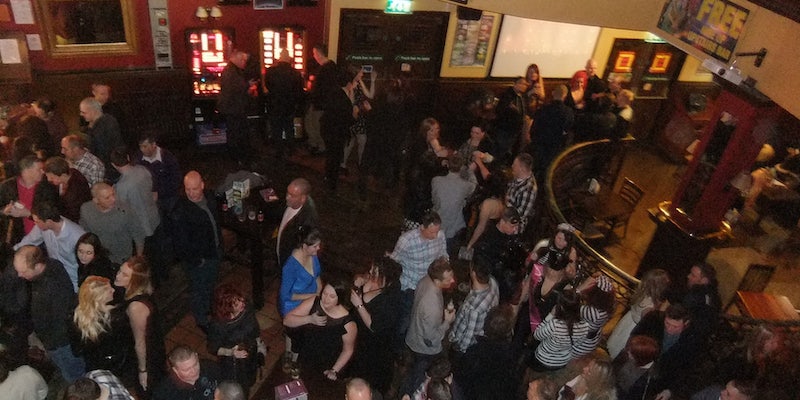 Mingleton is a creepy Tinder clone for strangers in bars

Don't look behind you.

Launched by Harvard grads Obi Ekikezie and Joel Ayala, Mingleton uses iBeacon (indoor positioning) technology to connect you with people within 50 meters. Because the technology is built into the iPhone, it doesn’t matter what venue you’re in, and it works pretty much anywhere.

Like Tinder, Mingleton connects directly through Facebook and shows you a list of people who are nearby and any Facebook friends you have in common. If you want to connect with someone, you can anonymously ask them to “mingle,” and if they choose to “mingle” with you back the app shows a match. The app’s creators say it’d work best in a crowded bar or concert or festival, someplace with a lot of people who would potentially be logged into the app.

Ostensibly, Mingleton is intended to be use in the reverse way that one uses Tinder: instead of logging into Tinder to find a match and then meeting them in person, you’d use Mingleton to check out the profile of someone you’d already spotted in person, and then you’d match with them on the app before approaching them IRL.

In this sense, Mingleton eliminates the possibility of meeting someone who looks nothing like they do in their profile, which is one of the chief complaints users have about Tinder and other dating apps. The reasoning seems to be that since you’ve already seen them in person, there’s no way they’ll fail to live up to your expectations.

This is a good idea in theory, but it also raises a number of potential issues: specifically, safety concerns. Although Ekikezie and Ayala say that the app only matches people who’ve chosen to “mingle” with each other, if you’re in a small enough space there’s no way you can avoid an awkward confrontation with someone who wants to “mingle” with you, but who you don’t want to “mingle” with back. Unlike Tinder, where you can simply block someone if they make untoward advances, it’s a bit difficult to do the same to someone who’s within 50 meters from you IRL.

But assuming that the desire to “mingle” is mutual, an app like Mingleton, if it catches on, could actually be a fun way to pass the time if you’re bored at an event, like a jam band concert (shudder) or a friend’s improv troupe performance (double shudder). So who knows, maybe the “Tinder for nearby creeptastic strangers named Brian” isn’t so strange or creeptastic after all.

Or you could just, I dunno, tap the shoulder of the person next to you and say hello like a human being instead, instead of a socially incompetent iPhone with legs. You know. Whatever floats your gravy boat.