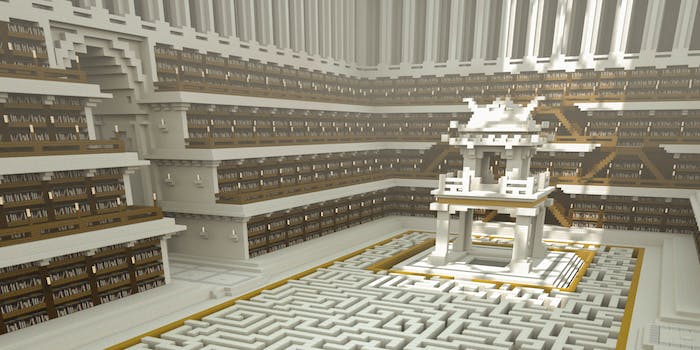 In an effort to combat censorship and encourage the spread of information, the creators of the world-building game Minecraft have built an online “library” where people can access reports from journalists in censored regions.

The launch coincided with World Day Against Cyber Censorship on March 12. The day is an online event intended to drive support for an “unrestricted internet.”

Reporters Without Borders, an organization that advocates for the right of press freedom, created a Minecraft “library” that contains books with international reporting, which are available to people worldwide. These books contain information about what’s happening in regions that suffer from government censorship.

The website for the game makes the point that the library is crucial for countries where propaganda is stronger than the free press. The library features banned reporting from Mexico, Russia, Vietnam, Saudi Arabia, and Egypt. Each country has its own wing.

Gizmodo reports that there are two ways to access the library. The first is a download of the map from the Uncensored Library website, where it can then be moved into your .minecraft folder. The second method of access is simply connecting to the Uncensored Library’s own server in Minecraft without downloading it.

The journalists featured in Minecraft’s new library are Jamal Kashoggi of Saudi Arabia, Yulia Berezovskaia of Russia, Nguyen Van Dai of Vietnam, Javier Valdez of Mexico, and Mada Masr, an independent Egyptian newspaper. Kashoggi and Valdez were assassinated in 2018 and 2017, respectively.