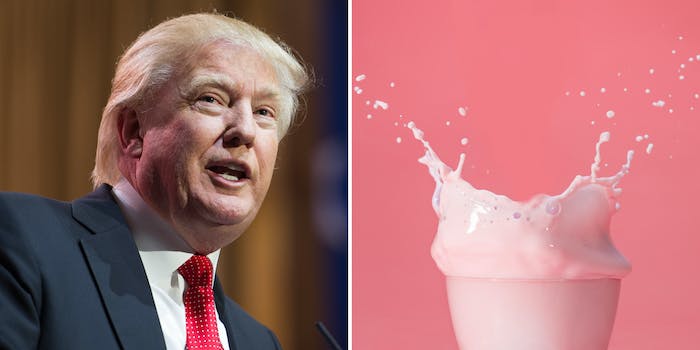 EXCLUSIVE: The Secret Service was worried Trump would get hit with a milkshake

"At some point on this trip, one of the 4 of us is getting "Milkshaked'."

In advance of President Donald Trump’s spring 2019 trip to England, the Secret Service had a new, looming threat it was concerned about. Alongside the regular concerns over a head of state traveling to a foreign country that had been, throughout his presidency, rather frosty toward him, Brexit party leader Nigel Farage had just been hit with a milkshake.

And now the Secret Service was worried that someone was planning to pelt the president. It wanted to contain the threat.

To do so, the Secret Service was searching Facebook protest groups and reading tweets, monitoring milkshake chatter across the web.

Records released to the Daily Dot via a FOIA request to the Secret Service show that the agency was focused on the threat, enough to file reports of tweets that daydreamed about milkshaking Trump.

People were already plotting protests for Trump’s visit to England, when on, May 20, Farage was splattered with a milkshake in Newcastle, the latest in a spate of European leaders hit by ice cream-based drinks. Debates over the act raged, with many believing politicians deserved the humiliation and spectacle of the act. Others considered it crass and inherently violent.

But after the Farage milkshaking, the Secret Service shared an article about it.

“Thanks, We’ll have to keep an eye on SplashThe[Fash],” one person responded, using the hashtag that called for right-wing politicians to be milkshaked. “I’m sure it will get a lot of attention. I’ll pass it along to the person monitoring the trips.”

Secret Service employees joked, in response, that they wouldn’t waste a milkshake.

Around the same time, a different chain highlighted the concern as well.

It explained what milkshaking was, and noted the Farage incident. It went on to say that “Social media searches for mentions of President Trump and milkshakes revealed numerous posts suggesting for milkshakes to be thrown at the President while in London.”

That email came from a protective research specialist with the Secret Service’s Open Source Unit.

One particular tweet from the Secret Service, that appeared to be forwarded from the FBI, was of interest, prompting a search of that user’s other social media, as well as an official report being filed.

The Daily Dot is redacting the language on the tweet, as it still available to see online.

After seeing the tweet calling for Trump to be milkshaked, the Secret Service tracked down the user’s other accounts on different social media platforms, to attempt to view other threats and confirm the identity of the user, which they successfully did.

When the Daily Dot informed the Twitter user of their presence in the documents, they said it’s “equal parts disturbing and hilarious” that the Secret Service was looking into them.

“Clearly, the U.S. authorities are unfamiliar with our humor, as well as our utter contempt for the former president. However, I wouldn’t have bothered wasting a train ticket to go and see him. I appreciate they have to check for credible threats but really, a milkshake??” they added.

The user said the Secret Service did not reach out to them over the tweet.

Even though reports were filed and concerns raised, some Secret Service employees responded to the email with some lighthearted jokes. One said someone began singing Kelis’ “Milkshake” in the office, others said they were happy it wasn’t glitter, and another mock-worried the sale of milk would be banned while they were there.

But, even for the lightheartedness in the emails, the Secret Service continued to monitor social media for comments about milkshaking in advance of Trump’s trip.

In emails about the upcoming demonstration for Trump’s trip, an email noted there are “numerous mentions on social media by individuals encouraging them to bring and greet POTUS with a ‘milkshake’ Additional OSINT will be conducted on the ‘milkshake’ reference.”

The Secret Service also tracked a Facebook group called “Milkshakes against Racism” monitoring its increase in likely attendees to the protest in London over time.

It noted that the group called on members to “peacefully protest,” and members of the group shared memes of people being milkshaked.

Trump’s trip wasn’t the only concern of the Secret Service at the time. Vice President Mike Pence was also traveling to Canada. While monitoring the situation, the Secret Service found a group that pledged to pummel Pence as well.

Despite all their research into the milkshaking threats, at least some agents seemed resigned to their fates.

“At some point on this trip, one of the 4 of us is getting “Milkshaked'” one person in the Presidential Protective Division wrote about the upcoming trip to England.

They appear, though, to have done enough advance work, as Trump did not get milkshaked in London.

The Daily Dot has uploaded the whole Secret Service response to DocumentCloud. You can view Part 1 here and Part 2 here.

The Secret Service did not immediately respond to a request for comment.