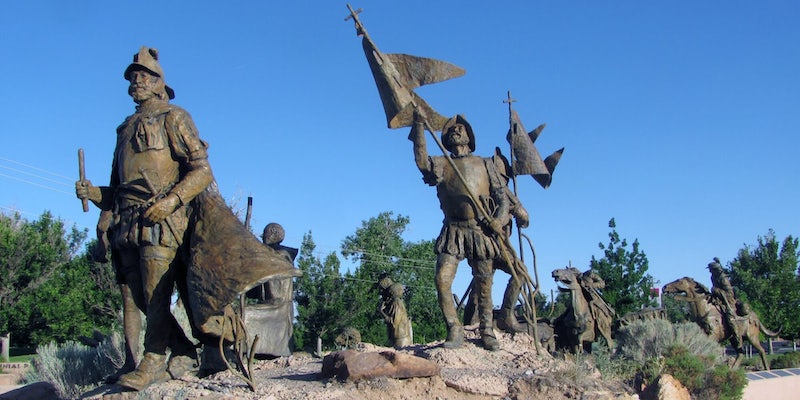 Police say the unidentified man who was shot is in 'critical but stable' condition. The group denies involvement.

Violence erupted at a Monday protest in Albuquerque, New Mexico.

Protesters gathered around a statue of Juan de Oñate, New Mexico’s controversial 16th-century governor, demanding its removal. Tensions rose throughout the protest before finally boiling over in the late-afternoon. The resulting shouting match ended with a man shot and several members of a vigilante militia group in handcuffs.

Updates from police indicate that the unidentified man who was shot is in “critical but stable” condition at an area hospital. Following the shooting, several armed members of a right-wing militia group reportedly were taken into custody. While police have not announced any charges, witnesses identified the shooter as a “white man in a blue shirt,” according to the New York Times.

Video of the moments directly following the shooting show protesters gathered around the fallen man. A person with medical symbols on their hat is crouched next to the victim, while bystanders call for water. Possible members of the militia group can be seen in the background of the video.

Following reports from witnesses that a white man in a blue shirt fired the shot, several videos arose online claiming to expose the shooter. In one, a man in a blue shirt can be seen producing what appears to be a weapon moments before shots are fired. Another shows the same man, with a simple brown scarf around his neck but not covering his face, shoving protesters away from the statue earlier in the day.

Following the shooting, the Albuquerque police department put out a statement on Twitter. In it, the department noted that the protest ended “peacefully” and that the FBI had come in to assist police.

A following message from APD Chief Michael Geier condemned the violence. “We are receiving reports about vigilante groups possibly instigating this violence,” he said. “If this is true will be holding them accountable to the fullest extent of the law, including federal hate group designation and prosecution.”

Following the shooting, the protest dissolved into chaos. Police arrived to secure the scene using chemical irritants and stun grenades, according to the Times. Photos from the Times article show the man in the blue shirt, along with several other suspected militia members, being detained by police.

In the hours following the protest, word spread about the militia group and subsequent shooting. Several online sleuths tracked down the New Mexico Civil Guard, suspected to be the group in question.

Twitter user Christina Rodriguez tracked down the group’s Facebook page, where it shared news articles on a number of topics. Stories include one on the “basic fundamentals and principles for ambushing,” and another claimed to be an “infantryman’s guide” to defense.

The militia group posted an updated status Tuesday morning. In it, the group confirmed they were at the protest, but claimed that no members fired a shot, and “none of our men went to jail.”

The aim of the protest was at least partially accomplished despite the shooting. Mayor Tim Keller announced, several hours later, that the Oñate statue would be removed until further notice.

The violence arose on the same day that Albuquerque officials announced sweeping changes to its policing. A new community safety department will receive a portion of the funds formerly allocated to police. The new department aims to give community members an option aimed at de-escalating situations. Members of the department will tackle issues related to “homelessness, addiction and mental health,”according to the Times.

Update 1:47pm CT: Police released the name of the suspect this afternoon.

Stephen Baca was charged with aggravated battery with a deadly weapon and firearm enhancement, according to the Washington Post.

Police have not said if Baca had any connection with the group.