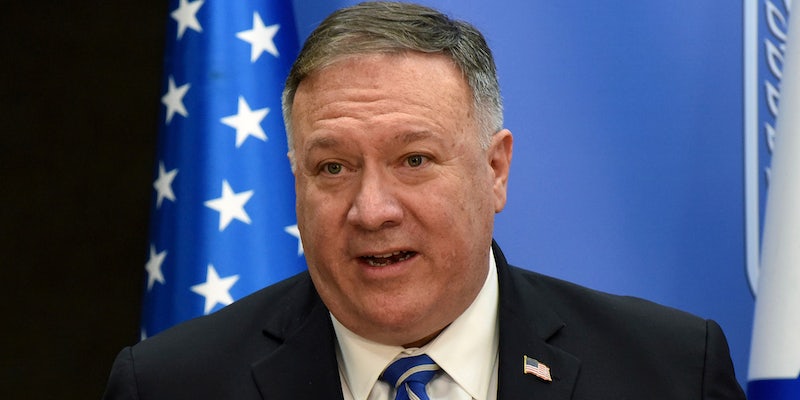 ‘Did Mike Pompeo become a spokesman for crack?!’: Internet revels in Pompeo’s call for Americans to become ‘pipehitters’

The jokes practically wrote themselves.

Mike Pompeo has served as director of the Central Intelligence Agency and as secretary of state. Apparently, these positions don’t require much marketing experience. Because Pompeo’s new lingo for “conservative” is inspiring laughter across the internet.

On Tuesday, Pompeo’s new political action committee, CAVPAC (“cav” is short for “cavalry”) tweeted a call to action in the form of a question: “Are you a pipehitter?”

“Calling all unapologetic Americans to join me and become a Pipehitter,” he posted.

Pompeo and CAVPAC’s call to action may as well have been a call to be ridiculed. It wasn’t unlike the time Pompeo was roasted for tweeting a “department of swagger” seal.

“And I’M calling the even MORE unapologetic Americans to join me and become a Poledancer. Let’s work it, babies!” Bill Corbett quipped.

Others thought a bit outside the pipe jokes.

Talking Points Memo’s Josh Marshall pointed out that not only does pipehitter not mean what Pompeo claims it does, there’s actually already a pipehitter foundation helmed by accused war criminal Eddie Gallagher. (There’s also a merchandise company.)

Like Marshall, some noted that one of the word’s actual meanings refers to elite members of the armed services. Some opined that Pompeo is using the military as a prop by appropriating the term.

Drugs by far dominated the discourse about Pompeo’s pipehitters.

Pompeo, either oblivious to the ridicule or reveling in it, continues unironically tweeting about becoming a pipehitter.