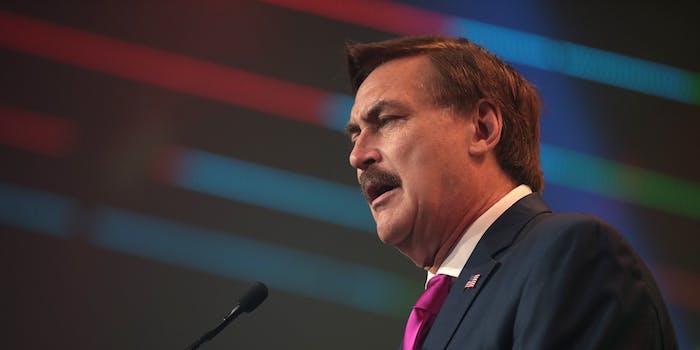 Republicans wouldn’t let the My Pillow guy attend their conference

Lindell told Steve Bannon that he planned to confront Republican Govs. Brian Kemp and Doug Ducey, of Georgia and Arizona, respectively, for refusing to overturn the 2020 election in favor of his main man, former President Donald Trump.

The RGA was having none of it. Shortly after Lindell collected his credentials at the Nashville, Tennessee event, Politico reports, he was informed that he wouldn’t be allowed to attend.

Lindell, the CEO of MyPillow, has become one of the most vocal proponents of the lie that the 2020 election was stolen from Trump. He’s among those being sued for more than $1 billion each by Dominion Voting Systems on the claim that he spread defamatory disinformation about the company.

Lindell has seemed both unbothered by the lawsuit. Since the suit was filed in February, Lindell has continued parading conspiracy theories and recently wasted $1 million creating a safe space for those who’ve been kicked off other social media platforms.

While some in the ever-diminishing MAGA world whined about it, elsewhere on the internet, the news that Lindell has become too toxic for even the RGA was met with ridicule and memes about both him and his products.

“Much like his pillows, Mike Lindell keeps getting thrown out of hotels,” tweeted Christopher Hahn.

According to Politico, after getting kicked out, Lindell hopped on his private jet and left.