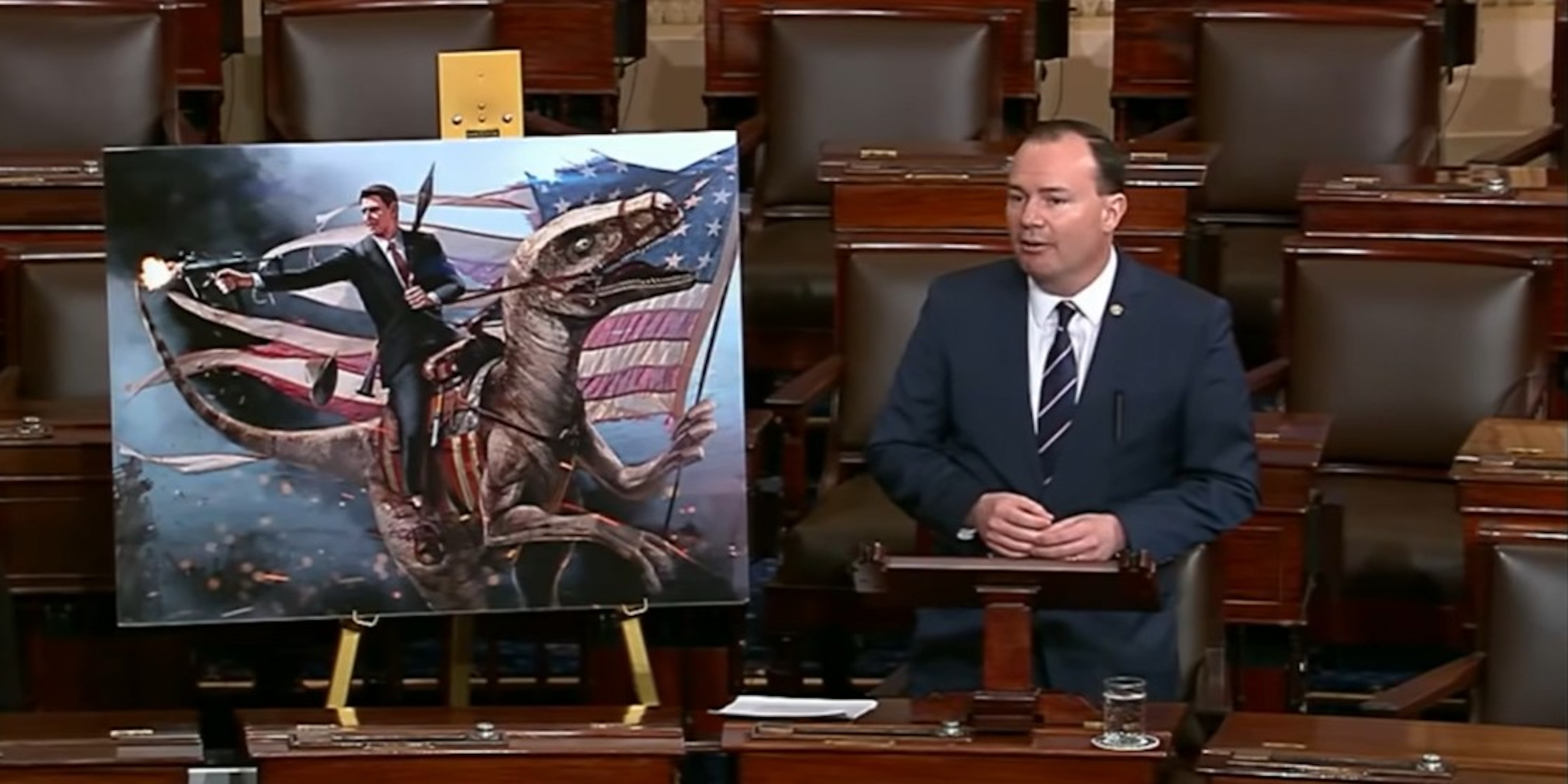 Mike Lee is a partisan who has principles

He does stand for something, but Lee overwhelmingly sticks to the party line.

Sen. Mike Lee (R-Utah) is a partisan but not a total pushover.

Lee is reliably conservative on pretty much every issue. The Heritage Foundation gives him a 96% lifetime score—well above the average 80% it gives other Republicans.

But every now and again he’ll surprise you.

In 2016, Lee wrote an op-ed for the Daily Dot opposing a mandate requiring tech companies to include an encryption key so the government can unlock devices.

In 2018, he opposed Trump’s tariffs and vowed to make sure they were never enforced.

In 2020, he demanded to know if the Trump administration was conducting a potentially illegal mass surveillance campaign on Americans.

Just when you start to like him, he does something like oppose net neutrality or promise to “phase out Social Security.”

He does stand for something, but Lee overwhelmingly sticks to the party line.

Although he would occasionally go against Trump, Lee also tweeted plenty of praise for their Dear Leader when he was in office.

He even went so far as to liken Trump asking Ukraine for dirt on Biden (and getting impeached for it) to Obama giving amnesty to the Dreamers under the Deferred Action for Childhood Arrivals executive action.

Then again, unlike his colleagues who suggest the Capitol rioters were just innocent tourists, Lee blasted both Trump and the violent mob that attacked Congress.

“No one can condone the horrific violence that occurred on January 6, 2021—or President Trump’s words, actions or omissions that day. I certainly do not,” he wrote in a statement.

He then said that he nevertheless wouldn’t vote to convict Trump of inciting that mob, and called the process “suspiciously political.” Which, um, what?

Lee’s inconsistency made a helluva lot more sense when his early efforts to overturn the election came to light, including texts urging the administration to work with the Kraken herself, Sidney Powell.

He’s the kind of senator who uses endearingly dorky props and jokes about Sharknado 4 during a speech to the Senate. Moves like that almost make you forget that he’s trashing the Green New Deal.

Maybe that’s why trolls flood his mentions pretty much every time he tweets. Dude can’t even post about Halloween candy without getting ratioed.

Lee comes from a political dynasty. His father worked for President Reagan. His brother is on the Utah Supreme Court. And he’s in a reliably Republican state.

Lee, fresh off a victory in the midterms, clearly isn’t going anywhere.