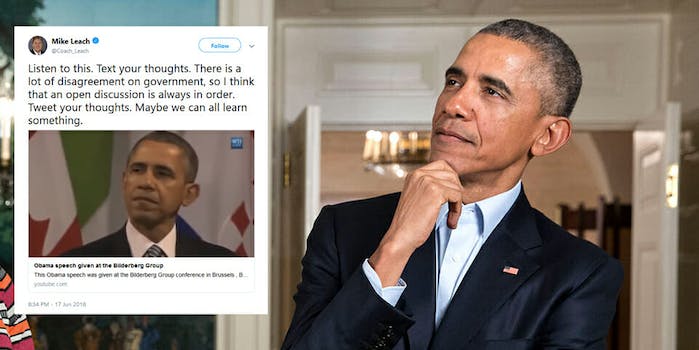 Mike Leach tweets out fake Obama video, argues with internet about it for hours

There's a transcript of the speech online.

Mike Leach, the head coach for the Washington State University football team, defended himself online after numerous people pointed out that he tweeted out a clearly-doctored video that aimed to paint former President Barack Obama in a negative light.

On Sunday, Leach tweeted out a video that claims to be of the former president giving a speech in Brussles, Beligum in 2014.

In the video, which is clearly edited to mix up Obama’s speech, he says:

“And for the international order, that we have worked for generations to build… ordinary men and women are too small-minded to govern their own affairs. That order and progress can only come when individuals surrender their rights to an all-powerful sovereign.”

Leach apparently found the clip compelling, because he tweeted it out and told his 100,000 followers:

“Listen to this. Text your thoughts. There is a lot of disagreement on government, so I think that an open discussion is always in order. Tweet your thoughts. Maybe we can all learn something.”

One second of fact-checking shows that the video is clearly fake, but that didn’t stop Leach from arguing about it with people on Twitter who were noting he was pushing out a hoax meant to rile up people’s conspiracy theories about the former president.

When one Twitter user pointed out that the video was a “hoax,” Leach didn’t seem to agree, telling them to “prove” it was fake.

The coach also asked the same user what in the video was “false.”

The proof Leach was asking for is easily obtainable. A transcript of the speech, which was made on March 26, 2014, is available in an archived form on the Obama White House’s website. And finally, after hours of being heckled, he admitted it was false.

This is the complete speech. I agree that the video was incomplete. However, I believe discussion on how much or how little power that our Gov should have is important……Remarks by the President in Address to European Youth: https://t.co/BnNzxyivyN

Here’s what Obama actually said, in separate parts that were doctored together in the video posted by Leach:

In other responses, Leach tried to say that regardless of whether it was real, people should have “a discussion of the ideas.”

Which, of course, the ideas he wants to have a discussion about don’t exist.