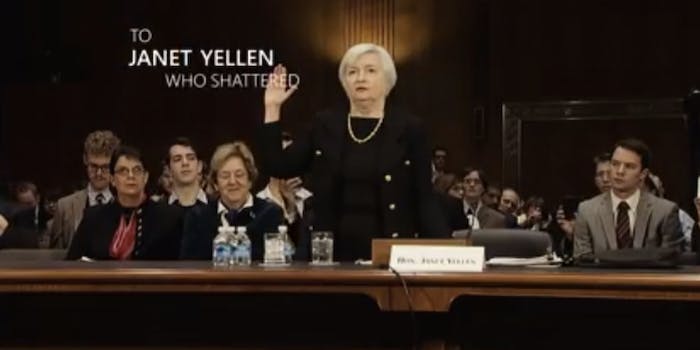 You can't beat Google just by listing a bunch of notable women.

The idea of feminism as a “brand” leaves a bad taste in my mouth, but that’s how Microsoft presents it in a new ad that ran during the Golden Globes.

Bing, Microsoft’s flailing search engine, released the spot a few weeks ago, but it finally reached a large audience during Sunday night’s awards, and reactions were very mixed.

On The Aerogram, Rohin Guha writes, “The spot takes the stories of many strong women…and uses them to brand Bing’s identity, under the guise of ‘Celebrating the Heroic Women of 2013.’”

Most of the comments on the YouTube video are positive, and it was even posted by Amy Poehler’s Smart Girls At The Party. On Slate, Katy Waldman said the ad was “bizarre.”

“Does the search engine want to be congratulated for noticing that women accomplished stuff this year?” Waldman wrote. “Are we supposed to believe that there’s something particularly woman-friendly about Bing?”

Daniel D’addario on Salon says the ad extorts accomplished women and simplifies them. For example, placing activist Malala beside Margaret Thatcher is “muddled.”

“It’s hard to imagine Janet Yellen, the new Fed chair, being happy about being featured in an uplifting ad solely on the basis of her gender,” he wrote.

The ad seems pandering and condescending at worst, and not very well thought-out at best.

And we’re all still using Google, Microsoft. Not even feminism can change that. Sorry!